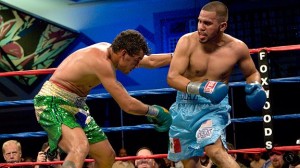 This is Diaz’s second outing since retiring in 2011, shortly after dropping a 12 round decision to Juan Manuel Marquez. The former world lightweight champion was inactive for nearly three years but as we so often see with retired fighters, the Baby Bull just couldn’t stay away, and returned this past April to score a sixth round stoppage over Pipino Cuevas Jr.

The Houston native took to the pro ranks in 2000, it took him just three short years to win the WBC youth lightweight title in his 21st bout before moving on to capture the WBA lightweight strap from Lakva Sim in 2004, a victory that made him the second youngest world champion in history. Along the way he would add the WBO and IBF belts to his collection, making a total of seven successful title defenses before a close decision loss to Nate Campbell in 2008 cost him all three titles.

Diaz would have a see-saw career from that point on, taking part in some brutal and exciting bouts; he would come back to win the IBO lightweight title later in 2008 defeating Michael Katsidis over 12 rounds, but lose that belt to Juan Manuel Marquez in their first meeting where Marquez was putting up his WBO and WBA titles as well. After splitting a pair of bouts with Paul Malignaggi that would see Diaz hold a short reign as the NABO light welterweight champion, he would meet Marquez a second time and lose a 12 round decision.

Retirement followed. Diaz concentrated on his business ventures: his trucking company, a coffee business, and involved himself in politics. These days, he’s feeling that it’s time for him to be a champion again.

Much like Cuevas Jr., De Jesus is a familiar name but should pose little trouble for Diaz. He last fought in 2011 winning a first round stoppage over less than stellar Denis De Barros. He’s been I the ring with some top opposition, but has failed every time. He’s a good choice of opponent for Diaz at this point; a guy that can stick around for a few rounds, give Diaz some work, but will more than likely fold well before the closing bell.