Welcome back, family. Another green, white and red edition of the Sunday Brunch is on tap. This week we’re serving up a special ‘what If’ edition of boxing’s number one weekend column. We’ll be taking a look at potential outcomes from next week’s mega-money match-up when Money Mayweather takes on possibly the toughest, most durable opponent that he’s faced in 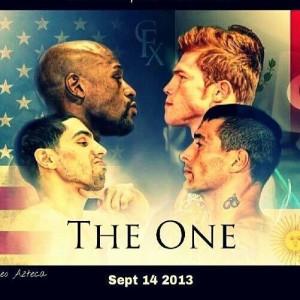 many years. So, grab some smoking hot barbacoa and pour yourself a huge glass of mescal, we’re about to get preposterous and fantastical. With that being said, I gave you your instructions in the dressing room; what I say you must obey – Cuidate, escucha me, toca los manos y buena suerte…Let’s get it on!

Saul Alvarez shows up to the MGM Grand on Friday and comfortably weighs in at the 152 pound mark.  After the weigh in, the young Mexican champion doesn’t even so much as grab a bottle of water. Come fight night, Canelo somehow blows up to 169 pounds and manages to use his enormous size advantage to nullify Mayweather’s shoulder roll defense by smothering him against the ropes.

Instead of throwing combinations to try and locate chinks in the proverbial  armor of Mayweather, Saul uses his body weight to lean on the defensive minded fighter, subsequently tiring him out and causing his arms to drop slightly as the fight progresses. As the match moves into the championship rounds, Floyd Mayweather is being out-landed, out-hustled and overwhelmed by the much younger fighter. SD – Saul Canelo Alvarez.

Floyd Mayweather has seen the style of Saul Alvarez. There is nothing that the 23 year-old, fire-haired tiger can do that the 44-0 champion hasn’t dealt with before. When the two fighters meet in the MGM Grand on September the 14th, Mayweather will start fast. The Grand Rapids native opens up his whole arsenal in order to showcase his incredible skill set and to entertain the throngs of pro-Alvarez supporters in attendance.

While Mayweather is greeted by a deafening chorus of boos, by the conclusion of the hostilities the arena very much resembles the classic scene from Rocky 4 when Rocky Balboa overcame the huge Russian, Ivan Drago and his inhospitable, viperous fans. When the dust had settled, everyone, including the countries’ leaders, were on their feet cheering for Balboa. Mayweather registers a vintage performance. Floyd Mayweather – UD

Floyd Mayweather does everything right. He is patient, calculating and swift with his counters. Alvarez is cut bad and early (the very same cut opened in the Shane Mosley fight) and his team is unable to stem the flow of blood. By the mid-rounds, an exhausted Canelo Alvarez begins to become desperate to land on Mayweather, throwing wild shots that do little but excite the crowd and create a pleasant breeze in the ring.

By the time the scores are read aloud, the judges turn in a close, but controversial decision for Saul Alvarez. One judge, Dave Moretti scores the fight 117 – 111 in favor of Mayweather, while judges C.J Ross and the largely unknown Craig Metcalfe suspiciously score the fight 115 – 113 for Canelo. Saul Alvarez – SD

Saul Alvarez enters the ring supremely confident. His power is overwhelming, his speed was vastly underrated by Floyd Mayweather and his size plays a huge role in how the fight plays out. Mayweather will try to come out of the gate fast in order to inundate the larger man with flurries and to confuse him with lateral movement, however, Alvarez is somehow prepared for what Money is planning.

Despite his relatively young age, Saul Alvarez is able to smartly use his natural assets to push the 36 year-old Mayweather around the ring. With Floyd Mayweather genuinely on his back foot, Canelo is allowed to impose his will on the older man, forcing an intervention by referee Kenny Bayless midway through the melee. While Mayweather is able to beat the count, he is visibly weak in the legs and Canelo Alvarez responds by applying more pressure. Unable to respond to a massive volley of punches that starts off with a deceptively fast counter launched by Saul Alvarez, referee Bayless halts the action with five rounds remaining. Saul Alvarez – TKO

Floyd Mayweather feels Canelo out for a five round period, During that time, Saul Alvarez takes risks, expends energy and begins to lose confidence, while Money lands calculated counter punches to his face and ribs. The ever patient Mayweather stalks his soon to be 45th victim and awaits a perfect opportunity. When Alvarez has a momentary lapse of focus, Floyd Mayweather rears back and cracks the Mexican with an amazingly hard pull counter that sends him to the canvas, completely spent, Saul Alvarez fails to pull himself from the floor of the MGM Grand in time. Floyd Mayweather – KO

Thanks for joining us this week, we’ll be back next Sunday to talk about the aftermath of the Saul Canelo Alvarez / Floyd Money Mayweather super fight. We’ll have what I’ve noticed that week and perhaps a culinary tip or two. The Sunday Brunch – for when you’re sick of fluff pieces and reprints of press releases disguised as actual news. Stay tuned to The Boxing Tribune for all the latest news, views and commentary. Sante.