In a quality match up that’s getting little attention, IBF light middleweight champion Ishe “Sugar Shay” Smith (25-5, 11 KO’s) makes the first defense of his world title against “King” Carlos Molina (21-5-2, 6 KO’s) on the under card of “The One” pay-per-view event this Saturday night. 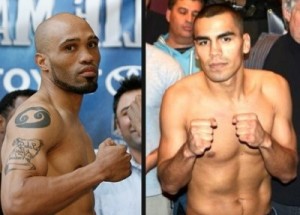 While Mayweather vs. Alvarez and Matthysse vs. Garcia are getting the major press, this bout has become second interest to many but make no mistake, this is quality match up between two very good fighters with opposing styles, and it should make for an entertaining bout.

Smith is a solid, well-rounded boxer. He doesn’t have any single outstanding attribute, but he does everything well. Even-tempered and disciplined, he displayed these traits in his title winning effort against Cornelius Bundrage in February. When Bundrage tried to rough things up, Smith stuck to his game plan, and out-boxed his opponent en route to a comfortable majority decision that earned him the light middleweight title, leading by five points on two cards. He was so emotional after the bout that he burst into tears when the decision was read; he’s a fighter that puts his heart into his work. He’s seen good opposition in his 13 years as a professional, as despite the set backs; losses to Sergio Mora in “The Contender” series and losses to Sechew Powell, Joel Julio, then Danny Jacobs and Fernando Guerrero up at middleweight, he’s never been stopped. Trained by Eddie Mustafa Muhammad, he’s trained often at Mayweather’s gym in his hometown of Las Vegas, which is big benefit.

Molina is a workhorse, the type of fighter that can give anyone a hard night. Not a heavy hitter, his bread and butter is his activity level and his solid chin; like Smith, he’s never been knocked out. He’s a busy fighter who likes to work in close. Facing some solid fighters over the years, he’s fought Julio Cesar Chavez Jr. twice (D6, L6), Erislandy Lara (D10), Kermit Cintron (W10), and was on his way to beating James Kirkland when his corner jumped into the ring after a knockdown and got him disqualified. Most recently, he out worked a faded Cory Spinks to score a near shutout decision.

This stands to be an entertaining fight for those that appreciate the finer points of the game. Both guys have solid chins, and neither has devastating power so a stoppage is highly unlikely. Smith needs to box effectively; keep Molina on the end of his shots and use his footwork to stay out of Molina’s range. Molina needs to do the opposite; cut off the ring and get in close where he can rough Smith up and bring him out of his comfort zone. With a slight height and reach disadvantage, he needs to get Smith to slow down and trade with him, really make him work especially in the latter half of the fight.

It may not be a show stealer, but for real fight fans, it’s a fight worth watching.