MGM Grand, Las Vegas, Nevada– For those questioning his thirteen-year age disadvantage or the fact that he’d be outweighed by as much as twenty pounds by the opening bell (it turned out to be a fifteen pound weight disadvantage), Floyd Mayweather (45-0, 26 KOs) proved that talent and skill are still the most important factors in big time prizefighting. 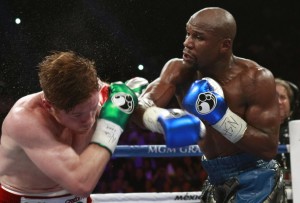 The 23-year-old Saul “Canelo” Alvarez (42-1-1, 30 KOs) came in as expected– honest and earnest in his effort, but was simply not good enough to handle the brilliance of Mayweather. Another year or so of seasoning may have helped, but possibly not enough to make much of a real difference in the bout.

To his credit, Mayweather showed up on the biggest stage of the year ready to put on a show and he delivered. Aside from his usual defensive mastery, the five-division world champ stood in the pocket more than at any other time in recent memory and went after his larger, younger foe, crafting another masterfully dominant showing against a legitimately solid, world class fighter.

The one blemish on an otherwise great night of boxing was the obscene 114-114 scored delivered by C.J. Ross. This was thankfully countered by correct scores of 116-112 and 117-11 by Dave Moretti and Craig Metcalfe, respectively to give Mayweather the majority win. The Boxing Tribune scored the bout 117-111 for Mayweather.

Mayweather now takes possession of Alvarez’s WBC junior middleweight title and unifies the splintered WBA title, held by both Alvarez and Mayweather prior to Saturday’s contest.

Philadelphia’s Garcia has been overlooked in talk of boxing’s top fighters and actually came into this bout as the defending champ and the betting underdog. But through twelve, Garcia proved his toughness and an underrated boxing ability in decisively outclassing Matthysse over twelve rounds.

As expected, Argentina’s Matthysse came in throwing big shots, but Garcia did enough to smother the slugger’s inside work and avoid the wide, sweeping shots from the outside. The few big punches that did land were easily dealt with by Garcia.

By the middle rounds, Matthysse’s right eye was swelling shut and nothing was working offensively. Garcia then picked up the pace offensively and started cracking Matthysse with some big shots, especially left hooks that were becoming increasingly difficult to defend for the half=blind Matthysse.

Garcia scored an opportunistic knockdown in round eleven, sending Matthysse, who had become partially tangled in the ropes, to the canvas. However, that extra point was taken away when a point was deducted from Garcia in the twelfth for low blows.

After twelve it was clear who was the better fighter and who deserves to be the sport’s top junior welter.

–Lacking in precision punching on the outside and filled with mauling inefficiency on the inside, the bout was mostly a ball of nothing with rounds going back and forth with little actual fighting available to judge. At the end of the day, though, it was Smith’s utter inability to execute any sort of sustained offensive push that cost him his title on his very first defense.

Cano opened the bout in full control, stalking and hurting Theophane in the early rounds before a mid-rounds surge from Theophane evened up the fight. Still mostly in control, the Mexican Cano finished strong, winning the last couple of rounds to assure the victory.