In a bout where he clearly struggled against a smaller, infinitely less-talented Brian Vera, two of the ringside judges (Gwen Adair and Marty Denkin) scored Chavez as a decisive winner by 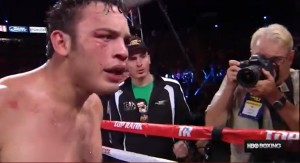 The odd scoring capped off a disgusting week which saw Vera disregarded in almost every possible way while the CSAC essentially allowed Chavez to dictate conditions of the fight based on his whims and general unwillingness to live by any terms of the bout he found inconvenient.

At the beginning of fight week, Chavez and his team informed everyone that the agreed upon weight limit of 168 lbs– up from previous weight caps of 163 and 165 lbs.– was no longer in effect. Rumors of a new 173 lb. limit emerged. Chavez promoter, Bob Arum, issued a statement saying that the weight limit would be settled after the official weigh-in.

Showing its first signs of life during the entire fiasco, the CSAC, headed by commissioner Andy Foster, meekly declared that the bout would be called off if Chavez weighed in more than eleven pounds heavier than Vera. It was the equivalent of closing the barn door after all of the horses had already escaped and only came about because everybody and their blog-owning brother was screaming for the commission to do something or at least say anything.

Still, Chavez struggled mightily to reach even the new, makeshift weight limit, reportedly spending hours in the steam room sweating off last minute poundage the day before the weigh-in.

Vera was compensated well for this mess, reportedly getting a six-figure payoff to play like nothing had ever happened. The Austin, Texas battler, though, was in no position to haggle. It was either take the money and, presumably take his beating, or lose out on the biggest payday of his career and take it on the chin when it came to all training costs associated with his sixteen week training camp, already once interrupted by a Chavez postponement.

There really was no decision to make. The gutsy Vera pushed forward into a situation that could’ve been infinitely dangerous to his health and well being.

Luckily for Vera, Chavez took the fight as lightly as he did his training and spent ten rounds doing as little as possible, counting on the occasional heavy-handed pot-shot and his famous last name to be enough to get him the win. He was correct in his assessment.

He was also, characteristically, less than gracious in victory.

After one full week of wearing the CSAC around his little finger and getting every benefit of every doubt by the judges on fight night, Chavez had the nerve to complain about the performance of referee Lou Moret. Claiming excessive low blows and headbutts, Chavez railed against the unfairness of the officiating. He did so in the ring, during the HBO post-fight interview, at the post-fight press conference, and all throughout the Mexican media.

On the surface, Jr’s problems all stem from training issues. But the real problem is a sport that kowtows to power and refuses to conduct itself like a real sport. The promise of one event in front of a half-full StubHub Center in Carson, California and the weight of HBO’s big Mexican lead-in to their first bit of Marquez-Bradley PPV promotion flattened the CSAC’s half-assed resolve.

We can talk about Top Rank coddling Chavez and allowing him to come and go as he pleases. We can point fingers at HBO for allowing Jr.’s star power to trump any other consideration. But, ultimately, promoters and TV networks are self-serving entities. We expect them to err on the side of filthy lucre.

The Chavez-Vera mess, from the weight controversy to the piss-poor judging, belongs to commissioner Andy Foster and the CSAC. Ostensibly, state commissions are in place to ensure an even playing field and oversee fighter safety. The CSAC, however, appeared to be little more than the organ grinder’s monkey dancing to the promotion’s organ music all through this fiasco. And to add insult to injury, Vera’s apparent triumph against all odds was negated by the commission-appointed judges who seemed to have scored the fight before the first punch had even been thrown.

Combat sports writer Zach Arnold of FightOpinion.com is the go-to guy when it comes to the ugly, mixed-up relationship between boxing/MMA and their regulatory bodies. He has had plenty to say about the Chavez-Vera fiasco.

“[Commissioner] Andy [Foster] views himself as promoter-friendly,” Arnold told The Boxing Tribune, “but what’s the point of a commission if you won’t use your authority to step in and regulate? Self-regulation of combat sports is a disaster.

“The bottom line on JCC/Vera is that once a contract was signed at 163, that should be the drop dead weight. No other bump ups in weight. No catch weight BS. 163 and that’s it. The mistake is allowing the promoters to keep bumping up the weight. You have to put your foot down and say no.

Andy Foster is learning trial-by-fire now on boxing. He’s an MMA guy. It’s why when Consumer Affairs picked him that I think everyone was stunned. It was a big risk. He’s a go-along, get-along kind of guy but the sharks are very large in this state and you can be swallowed if you aren’t intricately in-tune with the politicos.”

There’s no denying that the commission dropped the ball Saturday night. But, really, these commissions are structured to drop the ball. They are the deformed offspring of the incestuous relationship between boxing’s power brokers and big shot politicos. They are so compromised, from the inside out, that they can’t help but fail in their stated purpose.

But what’s the alternative?

Nobody feigns outrage better than the boxing media, but that outrage is usually directed solely at one or two lousy judges and it only lasts until something sexier comes along. Focusing on Gwen Adair and Mayweather-Canelo’s CJ Ross is like treating the flu by working on nasal decongestion. Poor judging and limp-wristed enforcement of regulation are the symptoms of a greater disease.

Cleaning up this mess could require a restructuring of the entire system and/or a major overhaul and start from scratch.

“The fastest way to solve the commission situation,” Arnold added, “is to remove them from state bureaus like DCA, Dept. of Business and Professions in Florida, Dept of Business in Nevada, etc. Have these commissions be state agencies but autonomous and without politicos interfering. Report to the Governor and that’s it. No go-betweens, nothing. The reason you don’t see this happen is because there’s often great fear that such a self-contained entity would get swallowed up by a state bureaucracy. Well, how would we know if no one is ever willing to try?

“The idea of a Federal oversight body, like the one Teddy Atlas proposes, would work in theory but does not work in reality because the lobbyists in DC would get right to work and the promoters would eat that up in a hurry…Nothing would substantively change. And we already have federal regulation for boxing in the Ali Act but since no prosecutor has been willing to charge anyone with a violation of the Act since it was put into place over a decade ago, the law is useless.”

But don’t count on anyone doing anything in the immediate future. Why should they? Right now, the system works for the sport’s money people, who can literally do just about whatever they want and it works for the bureaucrats in the commission, who cash fat checks for doing next to nothing. The only people not served are the athletes and the fans. In the real world, that would suggest some inside out priorities. In boxing, it’s called business as usual.

For an in depth look at the Chavez-Vera mess from the regulatory side of the issue, as well as an up close look at the officials appointed to the bout, read Zach Arnold’s: No good, really bad week for Julio Cesar Chavez Jr. & California State Athletic Commission.
* * * * *

Now, if you would indulge me for a second as I shill for myself.

For those not aware, my book, “Notes from the Boxing Underground” is available for purchase in ebook form for the crazy low price of $2.99. It chronicles the first two years of this Monday Rant column and gives newcomers a real good idea of why I have been pretty much blacklisted from polite blogging company.

So, if you’re late to the Rant game or just want to relive those crazy days when my inbox was being filled with threats of lawsuits and stabbings, order “Notes from the Boxing Underground.” Did I mention it was only $2.99?

Proceeds from the book will be invested back into The Boxing Tribune.

It was never my goal to create a quaint little blog when I started the Tribune. My goal was always to create a true alternative press for the sport, but that requires money to pay staff as well as bring on new people who can handle tech issues and sales stuff beyond my limited abilities.

So, help out the cause while enjoying some damn good writing. The book is available on Kindle, but you don’t need a Kindle to read it. Just download the free Kindle app to your smartphone or tablet and you’re all set. Pick up your copies of “Notes from the Boxing Underground,” HERE.

You can email Paul at paulmagno@theboxingtribune.com or watch as frat boy bloggers mock his inability to Tweet properly. Paul is a full member of the Burger King Kids’ Club, a born iconoclast, and an ordained minister in the Universal Life Church.