This Saturday night from the Amway Center in Orlando, Florida, Miguel Cotto (37-4, 30 KOs) of Caguas, Puerto Rico will square off against Danbury, Connecticut’s Delvin Rodriguez (28-6, 16 KOs) in a 12 round junior middleweight non-title fight. Also appearing on the HBO televised card will be 26 year-old Terence “Hunter” Crawford (21-0, 16 KOs) of Omaha, Nebraska as he takes on Russian Andrey Klimov (16-0, 8 KOs) for ten rounds of action in the lightweight division.

Prior to his unanimous decision defeat to Austin Trout on December 1st, 2012, Miguel Cotto and 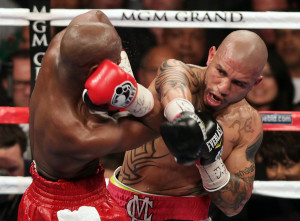 his team were hunting for a date with then undefeated junior middleweight world champion, Saul “Canelo” Alvarez. The Trout match was to be both a confidence booster and a rebound fight after Cotto posted an “L” in his biggest bout to date against Floyd Mayweather earlier in the 2012 calendar year.

“Canelo” Alvarez, of course, went on to claim a victory over Trout when the two met at the Alamodome in San Antonio, Texas in front of nearly 40,000 fans. Alvarez then later dropped the unified junior middleweight world championship when he faced Cotto conqueror, Floyd “Money” Mayweather in a mega-money match-up that broke numerous sales records.

Look for a rejuvenated Miguel Cotto (who’s now working with famed trainer, Freddie Roach) to be sharp early in the proceedings. He will operate behind a stiff, workman like jab that will set up left hook counters and leads. These two punches will be the hallmark of Cotto’s preliminary fight plan; by the mid-rounds, the Puerto Rican battler will crank up his work rate and use his exceptionally diverse world-class experience to befuddle and out land Rodriguez at a high clip. A bloody and ill-equipped Delvin Rodriguez will be saved by the intervention of the referee sometime in the eighth round.

While both Terence Crawford and Andrey Klimov are undefeated fighters, the pick here is with the American. He is more seasoned and looks to be lining himself up for bigger future opportunities; Terence Crawford has been featured on multiple Top Rank undercards. Look for Crawford to put his boxing skills on display and subsequently make the Russian look mediocre in the process. Terence Crawford by unanimous points call.