One of the biggest fights coming up on the boxing calendar is the super middleweight clash between WBA and IBF champion Carl Froch and George Groves, which is set to take place on the 23rd of November in Manchester, 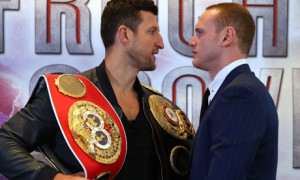 UK. The fight is attracting serious interest from boxing fans, but is also of major interest to those who enjoy betting on the sport, particularly as there are a number of issues that make trying to predict the result complicated for the boxing betting punter. The odds have been made available for this fight by the bookmakers now, so who do they see as the favourite to win, and are they likely to be correct?

At the moment, the opinion of the bookies is that Froch is the likely candidate to come out on top at the end of this clash, and you can get odds as low as 8/11 on him at some of the top sports betting sites – indicating the degree to which they fancy him to win. Partly this appears down to experience, as The Cobra has been in the ring with the likes of Mikkel Kessler and Andre Ward in much bigger fights than this up-coming bout – plus he is the current title holder. But it should also be remembered that Groves is ten years younger than his opponent and has nothing to lose in the bout– so if he goes at it from round one, his quick punches could potentially cause Froch real trouble. Given these factors his 7/1 outsider odds seem a little long, and many may fancy a bet on him to win at these odds.