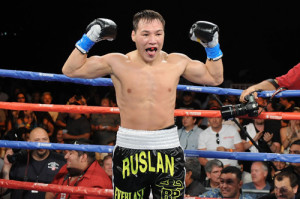 From the very beginning of the bout, Alvarado did what he had told the media he planned on doing– box and not engage in the type of back and forth battle that would benefit Provodnikov.

And in his game plan, Alvarado did well for the first six rounds or so, until Provodnikov began to touch the defending WBO junior welterweight champ to the body and head, slowing Alvarado down and cutting the distance between the two.

In the eight round, Provodnikov scored two knockdowns, both prefaced by thunderous body shots.

Alvarado, with swelling over his eyes, dragged two stiff legs from the punishment he was taking and fought back bravely. Unable to box as planned, he began to load up on shots to try and catch his rival with something big enough to end the fight or, at the very least, buy him some space and respect.

But Provodnikov continued to pounce and pursue, hurting a desperate Alvarado with nearly every shot and ultimately bringing about an RTD 10 defeat between rounds  when nobody in Alvarado’s corner, the ref, or even Alvarado, himself, really wanted the fight to go on.