In a recent exclusive interview with Rico Aguirre of the The Boxing Tribune, Mike Alvarado’s cut man and co-trainer, Rudy Hernandez discussed how unfair it is for people to call Alvarado a quitter. Rudy’s straightforward answers shed light on who really decided to end the fight and what went wrong that night. 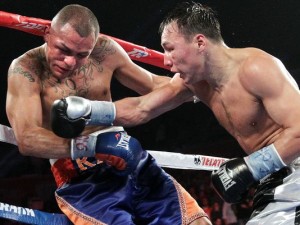 Rico Aguirre: So, basically you ended the fight to prevent serious damage to your fighter. However, some people are calling him a quitter and questioning his heart.

Rudy Hernandez: I ended the fight when I saw he was in trouble and didn’t have much left. People will be people. They’re not in his shoes nor will they understand…and bottom line, I could care less what they think.. They don’t pay the fighter nor our bills.

Rico Aguirre: Rudy, so you ended the fight because you cared more about your fighter’s health and future than anything else?

Rico Aguirre: What would you say to his critics considering they have never been in the ring?

Rudy Hernandez: Say? I’d tell them to go F themselves. Put gloves on and bring your ass to the gym and walk the walk. I’d tell them, “What fighter who has been beat down, have you helped pay his bills, or helped put food on his table?”

Rico Aguirre: Why do you think some boxing writers and fans think that a fighter is supposed to fight to the death?

Rudy Hernandez: Because those fighters are not their family members, friends, and just because they can write, talk, and pay to watch, gives them a right to their opinion.

Rico Aguirre: How has Mike taken this criticism as he clearly has demonstrated that he is a warrior in his fights with Rios?

Rudy Hernandez: But those whom at one time or another, have been there, would understand. They’re human beings, who chose to fight, and at the end, they do bleed, hurt, and break down!! Buildings made of steel, eventually weaken, so a human being, can’t nor shouldn’t? I take full responsibility for the loss!!! It’s my fault he didn’t win, and couldn’t continue. I was supposed to have him ready, but I didn’t, so it’s my fault. He’s upset with us, Delgado [Alvarado’s manager] and I, because he was forced to say yes to the referee….when we were the ones who quit.

Rico Aguirre: What do you think you could have done differently in camp in order to be better prepared?

Rudy Hernandez: More time to get ready. 23 days of me being there in camp is not enough.

Rico Aguirre: You believe that with more time you would have been able to work more on strategy?

Rudy Hernandez: Not just strategy but CONDITIONING AS WELL I’m not going to take nothing away from Provodnikov, he won and deserves all the credit in the world. I just believe that Alvarado is a better fighter overall.

Rico Aguirre: Thank You for your time Rudy. I am certain that the next time Mike fights he will come in better prepared. People have no idea how good you are for the sport of boxing.

Rudy Hernandez: If he ever fights again, I sure hope so. I did ask him to retire, but he posted on Facebook that he would come back stronger to avenge his loss.. He owes it to himself and his followers. And I believe he can win the next time. Trust me, he’s better than what we saw Saturday. Thanks and good night.