Boardwalk Hall, Atlantic City, New Jersey– Bernard Hopkins (54-6-2, 32 KOs) is now “The Alien,” but he can still muck up an opponent’s game plan like no other fighter in the sport– often to the frustration of a blood-hungry viewing public. On Saturday night as the main event of a Showtime triple header, the 48-year-old Hopkins also showed that he can still generate some solid action, letting his hands go a lot more often than usual in a decisive unanimous decision victory over Karo Murat (25-2-1, 15 KOs). 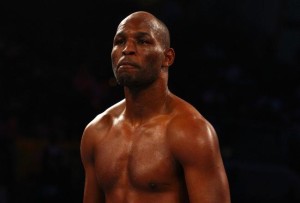 Making the first defense of the IBF light heavyweight title he won from Tavoris Cloud in March, Hopkins mixed some added degree of aggression to his usual recipe of “out-think and nullify” against a Murat who was solid and motivated, but not exactly an elite level 175 lb. fighter.

At this stage of his career, Hopkins will either be berated needlessly or applauded instinctively for his screen-ugly style, so fans and media will come to their own conclusions of whether this was a tactical masterpiece or just plain ugliness.

The truth, however, is that it’s somewhere in between both extremes.

Hopkins scored repeatedly with a lead right hand that kept Murat from initiating too many offensive rushes and then smothered anything inside to prevent his 30-year-old opponent from doing any work up close.

Like in many Hopkins fights, by the middle rounds his opponent was locked within a workable range for the former “Executioner,” blocked from launching attacks from the outside and buried in arms, elbows, head, and shoulders when getting too close.

Murat, to his credit, kept fighting, doing what he could to score– and often doing well enough to keep the fight competitive throughout all twelve rounds. Frustration would lead to him losing a point in the seventh for hitting on the break, but the Iraq-born German otherwise kept his head in the game.

Unfortunately for Murat and for the dedicated legion of Hopkins detractors, the 25-year veteran from Philadelphia is still good enough and smart enough to handle all but a small handful of the best talent in his weight range. After twelve rounds the judges’ scorecards reflected the true nature of the bout with scores of 117-110, 119-108, and 119-108. The Boxing Tribune’s unofficial scorecard agreed with the judges, issuing a 117-110 score in favor of Hopkins.

— In the Showtime co-feature, Peter Quillin (30-0, 22 KOs) made the second defense of his WBO middleweight title via frustrating cut-driven TKO 10 over Gabriel Rosado (21-7, 13 KOs).

What turned out to be an interesting tactical battle, was a slow burn with Quillin taking the first three rounds with little effort and even scoring a questionable second round knockdown over his challenger.

By the fourth, however, Rosado began pushing forward, earning respect with a wide right hook, and evening up the fight considerably.

Quillin, forced to fight backing up, managed to clip Rosado on occasion, but was clearly uncomfortable with the change in pace and direction.

Still effective when able to set his feet and punch forward, Quillin landed a crisp jab at the end of the ninth round that opened up a long gash on Rosado’s left eyelid.

The cut, spreading and increasingly gory, would lead to the quick stoppage of the bout by the ringside doctor at the forty second mark of the tenth round. At the time of the stoppage, The Boxing Tribune had Quillin up by a score of 87-83.

Wilder keeps the bandwagon rolling with another win inside the distance, but is still raw, crude, and relatively one-dimensional. Forget about the “next American world champion” tag, Team Wilder needs to take their time before sending Deontay to that next level of opposition.