When Gennady Golovkin 27-0 (24kos) faces Curtis Stevens 25-3 (18kos) at Madison Square Garden Theater, New York, this Saturday, it promises to be an explosive confrontation. This will be Golovkin’s eighth defense of his WBA world middleweight title, since he won that belt in Dec 2010. In the three years since winning his title, the Kazakhstan born champion has steadily built up his reputation and following, going from a cult favourite, to being on the verge of super stardom. 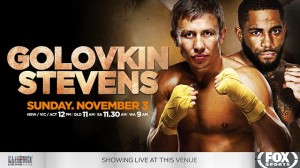 Golovkin is at the head of a new wave of fighters to come out of Eastern Europe, who have captured the imagination of the American boxing fan with their aggressive, big punching and crowd-pleasing styles. The Eastern European boxer was in the past known primarily as being technically sound, but stiff and upright in style. Solid and hard to beat, but unspectacular. Now, there is a new generation of Eastern European boxers, who while keeping a sound technical base, have adopted a far more aggressive, crowd pleasing, American approach to their fighting style. Golovkin has in recent months been joined by Sergy Kovalev (light heavyweight), Ruslan Provodnikov (light welterweight), and Evgeny Gradovich (Featherweight), all of whom have recently captured world titles in their respective weight divisions. Then there is former two-time Olympic champion, Vasyl Lomachenko (featherweight) who was such a sensation recently in his professional debut, that he is already being tipped as a superstar of the future, and steered towards an almost immediate world title shot.

It is Golovkin however, the GGG man, who looks to be the one whom will reach superstar status first. With Manny Pacquiao, Floyd Mayweather, and Sergio Martinez, all in their respective career twilights, boxing needs new stars and new elite stars more than anything else at this time. Golovkin, with his amenable out of the ring attitude, alongside his calm, but brutally efficient in-the-ring persona, could be one fight away from the kind of matchups that could gain him elite star status.

The Stevens match is Golovkin’s fourth fight and defense of this year, and this throwback activity, along with his spectacular performances in each fight, has seen his profile rise as the year has progressed. In Curtis ‘Kryptonite’ Stevens, the champion faces perhaps his most dangerous opponent yet. Stevens is a heavy hitter, with the punch power, especially in his left hook, to rival Golovkin’s own much vaunted fistic power.

Standing at only 5‘ 7“, Stevens is a stubby fireplug of a fighter, who began his career at light heavyweight, and has unusually moved down the weights over the years, first down to super-middleweight, then down to middleweight. Crucially with every move, he has been able to take his punching power down with him.

Stevens’ challenge for Golovkins world title comes after a short, but spectacular run of knockout victories he has scored in his last 4 fights (including three 1st round koes), most notably, his most recent outing, in which he crushed the normally very durable Saul Roman in the 1st round of their USBA title match. ’Kryptonite’s’ impressive form has coincided with his move down to middleweight, a move that occurred following an upset defeat to Jesse Brinkley in 2010, after which Stevens was inactive for two years.

With two fighters who like to go forward and throw bombs, this match has all the hallmarks of being a short, but explosive encounter. Golovkin, despite his swashbuckling reputation, is a very good technical boxer as well, which will be a significant factor in the fight. It could be said that Stevens, despite his fearsome power, is ready-made for Golovkin, style-wise, and his come forward approach will find him out-maneuvered, out-punched, and finally broken down systematically by champion. Stevens does have exceptional punching power and this alone gives him a chance of a spectacular upset. Golovkin has the reputation of having a good chin already, but all fighters can be hurt if they are caught cleanly by someone with a dangerous punch.

However, the chances are that it will be Stevens’ chin, which is tested the most and earliest. Although he has a reputation of being a patient fighter, Golovkin usually wastes no time in letting an opponent feel his power. This Saturday against Stevens, the GGG man will be eager to make a fast start of his own against a fighter who is known to be dangerous early. It could all be over very quickly, short and sweet, for the fans, and for at least one of fighters.

If he is to become one of the truly elite champions, and go on to contests with the likes of Sergio Martinez and perhaps even Floyd Mayweather, then Curtis Stevens is the type of opponent against whom he needs to look impressive, just as he did when he destroyed Matthew Macklin in the 3rd round of his last fight in June.

By late Saturday night we will know whether Curtis ‘Kryptonite’ Stevens has derailed the GGG man machine, or if Gennady Golovkin is indeed marching towards the kind of stardom reserved for only a handful of pugilists per era. The answer, when it comes, is likely to be explosive.