Madison Square Garden Theater, New York, New York– The result was never in doubt– some may say from the very moment the bout was signed– it was just a matter of when and how badly Gennady Golovkin (28-0, 25 KOs) would stop the hard-punching, but overmatched Curtis Stevens (25-4, 18 KOs) on HBO Saturday night. 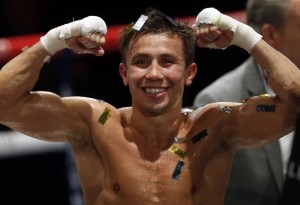 As it turned out, the defending WBA middleweight champ from Kazakhstan would box wisely, laying gloves on Stevens from the outside, but being sure to stay out of the pocket and away from the short-armed counters of the challenger.

A hard knockdown at the end of the second round, produced by a Golovkin left hook, pretty much killed any idea that Stevens even had a puncher’s chance. From that point forward, it was GGG setting the tone and pace of the bout, fighting when he wanted to fight and landing pretty much what he wanted.

A brief Stevens surge in the fourth round brought some excitement from upset-minded fans, but it was a short-lived moment of hope in a bout that saw the usually offense-minded challenger in high guard full retreat for most of the last six rounds.

By the eight round, Golovkin was picking and choosing which punches he wanted to land on a Stevens who bounced from one set of ropes to the other to escape the onslaught.

Busted up, likely the loser in each round, and with no visible game plan to change the course of events, Stevens was a beaten man in every sense of the word. To his corner’s credit, they saw the same thing and waved off the one-sided affair immediately after the end of the eighth round.

This was Golovkin’s ninth defense of his WBA middleweight title.

Perez, who comes from Cuba by way of adopted home country of Ireland, was just too athletic and too quick for his heavy-handed opponent, who kept coming forward but had no answer for an opponent who just wasn’t being hurt. Despite a point loss for low blows, it was mostly smooth sailing for the still-undefeated Perez.

After ten rounds, Perez was the busier and more accurate fighter, earning the unanimous decision victory. The Boxing Tribune agreed with the judges’ scorecards, seeing the bout as a 97-92 victory for Mike Perez.