Hello team and welcome to another organ crunching episode of the Mid-Week Meal Ticket – boxing’s number one mid-week substitution to the sport’s number one Sunday food themed boxing column, The Sunday Brunch. On tap for today will be a mélange of news, opinions and fun facts. We’ll be discussing the Nonito Donaire and Vic Darchinian rematch along with Manny 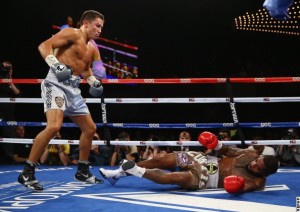 Pacquiao’s upcoming fight. Also – what the hell is next for Gennady Golovkin? We’ll be taking a few pokes at some of the more pokable characters in the sport, so hold on to your traditional Kazakhstani horse meat Beşbarmaq and learn how to say “mother fucker” in a few more languages, we’re about to start the show. With that being said, I gave you your instructions in the dressing room, what I say you must obey – Cuidate, escucha me, toca los manos y buena suerte…Let’s get it on!

Manny Pacquiao, as everyone knows, is coming off of a devastating knockout defeat to Juan Manuel Marquez in December of last year. The obvious questions swirling around the narrative of his clash with Oxnard’s Brandon Bam Bam Rios will be regarding the remaining ability of the Filipino. Often times fighters can become gun shy after a devastating loss, but judging by Pacquiao’s appearance on HBO’s Face Off with Max Kellerman, the former multi-divisional champ seems to be in good spirits and ready to fight.

Brandon Rios is under the (mostly correct) presumption that everyone is counting him out of the fight with Pacquiao. The Mexican American’s forward charging style does indeed seem customized to Manny Pacquiao’s particular tastes. He will enjoy a size advantage over the comebacking Filipino, though most do. Interestingly enough, Rios intimated during the aforementioned interview that Pacquiao is trying to line up a match with Floyd Mayweather, both Manny and Kellerman didn’t as much as bat an eye to the assertion.

Before things get marred in pre-fight propaganda, let’s not forget that Rios was out-boxed by Richard Abril some time ago. Most recently, Brandon was taken to task by the limited boxing skills of Mile High Mike Alvarado. If Pacquiao is even a shadow of his former self, he should return to form on November the 23rd.

— On Saturday,  Nonito Donaire will try get back in the winning column and reprise his role from 2007 against the somehow resurrected Raging Bull, Vic Darchinyan. Six years ago, the red hot Armenian was the lord of the flys and was pulverizing everything in sight including Donaire’s younger brother, Glenn Donaire (who technically lost to Darchinyan due to a broken jaw sustained via supposed accidental elbow, though at the time of the stoppage, nothing but clean punches were hitting Donaire).

This is an important night for both Nonito Donaire and Vic Darchinyan. For the Filipino, specifically choosing Vic for his return bout after an absolute shut-out defeat at the gifted hands of Guillermo Rigondeaux back in April means that anything short of dramatic victory could cause his stock to devalue in the eyes of the average fight fan.

For the unconventional southpaw, a conquest over the Flash in their rematch – especially after losing by stoppage years ago – would make for a definitive career highlight for Darchinyan. This match will be very interesting, the unquestionably motivated Armenian has had two wins in a row after dropping four bouts since his defeat to Nonito.

With a new baby boy and several other distractions outside of the ring, it’s understandable that one could  get the perception that Nonito Donaire’s focus isn’t 100% on boxing at the moment. Losing to Rigondeaux is nothing that should be considered damning, though, the Cuban is one of the most skillful fighters to ever step in between the ropes.

–Having fought four times in 2013 and at 30 years of age, Gennady Golovkin is in the physical prime of his career. He’s surrounded with a positive team and has an upbeat and productive mentality. We’ve established that Gennady Golovkin is the best among a long list of B-level fighters, so it time yet for GGG to appear only on PPV mega cards? He certainly has A – level skills and would probably fare quite well against the top crust of the middleweight division at this particular time.

Among the many dangerous attributes that Golovkin wields, his counter punching and killer instinct are as top rate as any in the division. Along with his thunderous punching power that has flattened nearly every soul he’s faced, I contend that Gennady Golovkin is one of the most consistent body punchers in the game. He has a fantastic left hook among other weapons that reminds me of a classic Hatton left hook, only more damaging.

Triple G has quite a few options regarding his immediate future. Being that his frequency of being in the ring is so high, boxing fans will be treated to some entertaining months ahead from the Kazakhstani killer. Let’s take a look at the top three most desirable of Golovkin’s potential opponents.

A mega money match-up with Money Mayweather would be the easiest and most obvious choice. Landing a bout with the pound for pound best in show is tantamount to winning the lottery. Seeing how Triple G called out pretty much anyone within three divisions of himself, this scrap could be feasible, if not just from a masturbatory, fan boy fantasy match-up point of view.

The problem with this would obviously be with the man himself. Mayweather, in my opinion, would never take an ultra-risky fight with the exceptionally heavy and educated hands of Gennady Golovkin. The Kazakhstani is just too unrealistic of a match for Floyd Mayweather, who prides himself on making smart business moves.

An all middleweight unification fight with the division’s recognized number one fighter, Sergio Martinez would be a very intriguing match-up. Maravilla may or may not be totally healed by the time he (if he) fights GGG. A victory would yield, among other things, a trove of belts and accolades as perhaps the most legitimate middleweight world champion in many years.

I believe a prime and uninjured Martinez would possess too many tools for the very European style of Golovkin. However, by the time the two men could potentially step in the same ring with each other, the now 37 year-old Sergio Martinez might be past his sell-by date. A choice to engage in combat against Triple G when not in perfect health could result a spectacular and concussive end to Martinez’ boxing career.

Kid Chocolate may have wrested the WBO middleweight title from a paper champion, but the 30 year-old half Cuban is a legitimate titlist. Having less than 20 amateur bouts, Quillin has had most of his boxing experience coming by way of on the job learning. Peter Quillin recently halted the game but outgunned Gabe Rosado over ten rounds, prior to that his biggest scalp was an extremely faded Winky Wright (who hadn’t had a victory since 2006).

Gennady Golovkin and Peter Quillin would likely be a thrilling encounter. Both men have crippling power in either hand and possess a very engaging, fan friendly style.

Thank you so much for joining us this week, we will be back at our regularly scheduled time on Sunday to discuss the Donaire and Darchinyan fight from over the weekend, also to look forward to upcoming bouts. Stay tuned boxing fans, more delicious and creatively assembled words await you! Sante.