Boxing’s current set-up makes it the shell game of modern sports. It’s a hustle. Sleight of hand. Watch the ball, watch the ball, where’s the ball? Only a true insider knows that the ball isn’t under any of the shells.

Rigged to only pay off for the hustler, the shell game counts on the dupes standing around the folding table to buy into the game. In an honest game of shells, you’d stand a one-in-three chance of winning. It would be a fair gamble. But the con man can only succeed if there’s a zero percent chance of anyone winning but him.

After decades of neglect, secrecy, and passing of the buck, boxing has become a hustle rigged to pay off for only the sport’s power brokers and a select few main stage fighters given a lip service guarantee of fairness. 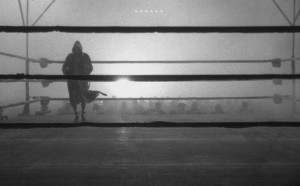 But this is not the typical “Boxing is Rotten” rant. The sport, itself, is an empty vessel. Neither inherently good nor bad, boxing takes the shape and form of those around it.

Instead, let’s focus on the moralists.

While boxing does attract more than its fair share of scoundrels and crooks, perhaps the most harmful character drawn to the sport is the fake moralist.

These hand-wringing creeps are drawn to prizefighting like the death-minded old ladies who hang around funeral parlors, attending services for strangers in their free time.

The moralists, mostly dwelling within the media, live to be outraged. They are only truly content when grief-stricken and melancholy. They pen cringe-worthy “Goodbye old Friend” articles when someone dies and over-the-top “Hail to the Glorious Victor” pieces whenever some fighter who gave them the time of day wins anything greater than a Continental America’s belt. When interviewing, they see “things” behind the fighter’s eyes. Maybe a burning desire or some sort of mind-meld indication that, yeah, this guy is serious about what he says.

Most of all, though, the moralists just LOVE causes. And Lord knows there are plenty of causes in boxing.

Unfortunately, the typical boxing moralist only cares about being outraged. They’re not there to find workable solutions or even plausible answers. They exist to grandstand and cater to their own pathologies and feed their own egos. They are the wannabe hot shot reporter trying to ride “his” cause to bigger and better things or the suburban hobbyist working through a raging case of white collar guilt.

They fall all over themselves to mourn the tragedy of Magomed Abdusalamov and ensure that his family is well taken care of, yet push aside the story of Frankie Leal, whose family fund has yet to even reach $6,000.

They cast aspersions on Andre Ward for not signing off on random testing for performance enhancing drugs against Edwin Rodriguez, yet were on the forefront of the “Why should he be tested?” campaign when Manny Pacquiao was the witch hunt target.

They will point fingers at judges and commissions, but never mention the money men who are behind all the regulatory mess and, likely, also sponsoring whatever website hosts their work.

They speak of ethics, journalism, and morality– until they finally have a chance to make some side deals for themselves.

And, sadly for boxing, the scoundrels of the sport use these fake moralists to prevent the greater good from being done.

Voluntary PEDs testing is a sick joke in the face of the real and present danger involved in chemically-enhanced prizefighting. Yet, as long as a few media dolts are placated by the kids running the candy store, the illusion of propriety has been accomplished and now real, sweeping changes need not be discussed.

Boxing’s regulatory mess can be placed on the perpetual back burner as long as the fake-outraged media is placated by the suspension of a few nitwit officials here and there.

I’ll repeat myself from my Frankie Leal rant of a couple weeks ago: There are no holy men in boxing– at any level. Left to its own devices, boxing will never really change, never stop being the Red Light District of the sporting world.

The sport needs clean money, fresh ideas, a unifying force to make everyone understand that there’s more money in running the sport honestly and fairly, with an eye on the future than the old school boxing method of grasping greedily at nickels and dimes.

Save the sermons and overwrought masturbatory writing for personal journals and freshman creative writing classes. From this point forward, those truly interested in the well-being of boxing need to brainstorm and come up with real solutions– not temporary feel-good moments in a long-running losing battle.

I don’t claim to have all the answers, but at the very least, I’m willing to start asking the right questions. I’m willing to put aside any and all past grudges in the best interest of the sport that has saved my life on so many levels. It’s a beginning. I hope I’m not alone.

You can email Paul at paulmagno@theboxingtribune.com or just skip all the pleasantries and buy his book, Notes from the Boxing Underground! Paul is a full member of the Burger King Kids’ Club, a born iconoclast, and an ordained minister in the Universal Life Church.