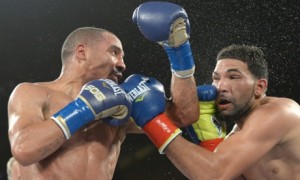 The bad feelings carried through the opening rounds, with Rodriguez amped up and looking to bully a much smaller Ward, who clinched with one hand and defended against mean-spirited rabbit punches with the other.

Eventually, though, Ward’s class, aided by referee Jack Reiss’ two-point deduction from both fighters in the fourth round for roughhousing, pierced through the angst-created fog and allowed for an actual prizefight to break out. This would be the beginning of the end for the hard-punching, but fairly one-dimensional Rodriguez.

A sharp jab from Ward landed hard and almost at will, allowing for the Olympic gold medalist and undisputed super middleweight champ to create some distance. From there, a thudding right hand was added to the mix, punishing Rodriguez every time he tried to step forward.

By the ninth round, with Rodriguez taking bomb after bomb, the only positive comment that could be made of the tough B-side in this bout was that he had a hell of a chin.

A cut over Rodriguez’s eye with just over a minute to go in the final round added insult to injury to a fighter thoroughly outclassed in the biggest bout of his career.

Ward, with the big win, still seems stuck in the same hole in which he found himself when he last fought, fourteen months ago. The man who has cleaned out the super middleweight division is now facing the prospect of having to fight recycled European opposition, which now refuses to budge from its home territory. A move up in weight may be necessary if Ward wants to keep having meaningful fights.

As for Edwin Rodriguez, it was a truly disappointing performance on so many different levels. He conducted himself very poorly throughout all of this, lobbing a grenade at Ward’s status as a PEDs-free fighter with a “gotcha” call for VADA testing at the bout’s opening press conference, then failing to make weight, and ultimately, in his failure to make things happen in the ring. To make matters worse, he would even blow off his post-fight interview with HBO. It was a really, really poor showing from an otherwise class act, who will now likely move up to the light heavyweight division, hopefully a bit wiser for this experience.