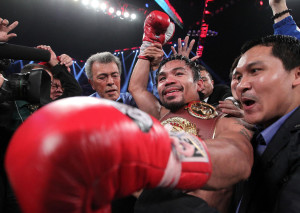 Rios, the quintessential tough guy, had the deck stacked against him from the beginning as a fighter too slow and predictable for the frenetic, unorthodox style of Pacquiao. An A+ fighter in the pocket, Rios has had nothing but failing grades against fighters with even the least bit of mobility and/or complexity to their game.

Pacquiao exploited each and every weakness and executed the perfect game plan, destroying the notion that he was somehow diminished as a fighter after last December’s face-first knockout loss to Juan Manuel Marquez.

Darting in and out while moving over and around Rios’ efforts at offense, Pacquiao avoided taking any punishment and was allowed to fight his fight at his pace and distance against a Rios who was unable to generate any sort of sustained offensive push. Instead, the tough Mexican-American spent much of his time defending himself, after the fact, against Pacquiao punches coming at him from all angles.

The only surprise in the bout came at the end, when one judges saw Rios winning two rounds and another saw him winning one. The Boxing Tribune scored the bout a complete shutout for Pacquiao, 120-108.

In a bout for the IBF featherweight title, Evgeny Gradovich (18-0, 9 KOs) successfully defended his title against former champ Billy Dib (36-3, 21 KOs) via TKO 9 when Dib’s corner retired on behalf of their fighter.

Gradovich, who beat Dib to take the title in March of this year, performed true to form. Pushing forward, he landed solid but unspectacular shots that began to break Dib down as minutes passed.

Dib was never in the contest despite trying several different strategies over the course of the bout, including a switch to southpaw.

Known as “The Mexican Russian,” Gradovich has now made two successful defenses of his title.

A dejected Hamer would return to his corner at the end of the third and opt not to continue.