For the first time in his career, former three division world champion “Sugar” Shane Mosley (47-9-1,39 KO’s) couldn’t last the distance. Headlining the card at the Allphones Arena in Sydney, Australia, Mosley was forced to quit on his stool when he faced hometown fighter and former world super middleweight champion Anthony “The Man” Mundine (45-5, 27 KO’s) for the vacant WBA International light middleweight title. 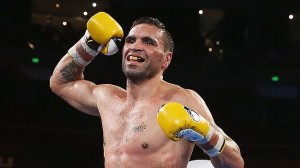 With the exception of the fourth round, where both fighters were staggered, the 42 year old Mosley was never in the fight. Mundine controlled the pace and distance of the bout, leaving Mosley one step behind throughout. Following the end of the sixth round, Mosley retired, citing a back injury.

For Mundine, this was easily the biggest win of his career, at least when it comes to name recognition. The Sydney native has been chasing a showdown with pound for pound king, Floyd Mayweather Jr., but hasn’t done anything to earn a fight of the magnitude. Mosley went 12 rounds with Mayweather in 2010 so last nights stoppage may give Mundine some level of bragging rights, as empty as they may be. In January, he lost a bid for the IBF middleweight title to Daniel Geale, but had won four straight bouts prior.

It’s no secret that Mosley’s seen better days. The WBC International welterweight title holder hasn’t won a meaningful fight since 2009, when he won the WBA Super World welterweight title by stopping Antonio Margarito, after Margarito was caught before the bout with plaster of Paris on his hand wraps. Since then, he’s fought to a draw with Sergio Mora, and lost to Manny Pacquiao, Saul Alvarez, and Mundine. He won a close decision over Pablo Cano this past May.