Boxing is a savage and fickle sport, and a fighter’s career can change dramatically in a matter of minutes between those four ropes. It can change with a single punch, or a hastily taken decision.

Although, officially Carl Froch retained his WBA and IBF world super-middleweight title belts last Saturday night (Nov 23rd) with a brave come from behind 9th round stoppage of challenger George Groves, he emerged from his victory battered and shaken, both physically and 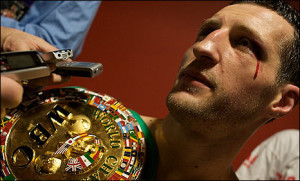 psychologically. In the days since, what was a marvellous shootout, the general consensus has been that the stoppage was woefully premature, and robbed Groves of a possible chance of victory. It is a view, which the 20,000 crowd in attendance voiced in no uncertain terms.

The crowd let its feelings be known very clearly in the moments after Howard Foster’s brutal interruption of what had been a classic contest. His actions provoked loud protests and derision, which at one point, threatened to spill over out of control. Froch also heard the protests and the anger, and as he raised his arms in victory as he heard the boos. It was a sound that must have hurt him more deeply than any Groves’ punch he took during the fight. Even the right hand, which laid him out on his back in the first round. The aftermath of the fight has been almost as brutal for Froch as the fight itself. The clamour has grown for him to grant an immediate rematch to his young tormentor, while the protests and anger at the stoppage (and the scoring of the fight) itself, have grown and grown. None more so than from Groves himself, who has left no doubt bout his feelings that Froch was favoured by both the referee and the judges on the night, and his defeat was nothing short of a robbery to save a high profile champion, who had big fights awaiting him in the future.

Froch has been left a man in turmoil. ’The Cobra’ finds himself at a crucial crossroads in his career. Always a proud man, who relishes his image as a warrior that has ducked no one during his career, Froch finds himself suddenly accused of doing just that, after his failure to follow up on his post-fight offer of a rematch to Groves. Although Froch publicly offered his brave challenger another shot at his title, in the heated moments following the match, when both men were being interviewed at ringside, in the days since, Froch has sought to distance himself from such a promise, and asked for time to reflect. The champion knows that the path he chooses from here will decide not only the conclusion of a career, which now seems destined to end sooner rather than later, but it will also have a massive impact upon his legacy as a fighter and a champion.

During the tense run up to their confrontation, Froch made it clear that to lose his world titles to a domestic opponent would represent the ultimate failure for him, and in his eyes at least, severely damage his legacy. Therefore, Saturday’s fight and its controversy and repercussions, must be no less than the ultimate nightmare for ’The Cobra’. Indeed, if anything could be worse than defeat for a fighter of Froch’s mentality, it would be to hold on to his titles with an ill-gotten, controversial victory.

With talk already from some sides about a possible Froch vs. Groves rematch taking place next summer at an open air venue such as Wembley Stadium, it would seem that the call of a second fight with Groves would be both too loud and too profitable for ’The Cobra’ to ignore. However, he has other options, which may pull him in a different direction than a Groves rematch.

Before the Groves fight, Froch was talking about a rematch with American Andre Ward, in order to reverse the defeat that Ward inflicted upon him in their super six-tournament final in late 2011. Ironically, since Saturdays fight, Ward seems more agreeable to meeting Froch in the ring again. Perhaps partly due to ’The Cobra’ now being open to travelling to Las Vegas, rather than holding out for Ward to come to England. In recent days, Froch has stated a preference to facing Ward in a rematch in Las Vegas, in what would be his finale. It seems that Froch is now looking at having one more fight and calling it a career, and that George Groves may not fit into this plan.

This option is not so clear-cut for Froch. With the inconclusiveness of Saturday’s fight still ringing in his ears, there are those who would accuse him of ducking Groves, if he were to opt for a swan song fight in Las Vegas against Ward. Though Ward is hardly an easier fight for Froch, the fact is that in fighting the American, Froch would have less to lose than if he were to grant Groves a rematch. If he lose’s to Ward again, it would be a loss to a man who is considered one of the best boxers in the world pound-for-pound. On the other hand, Groves is still a young fighter making his reputation, and a loss to Groves, a domestic rival, would be far more damaging. This is something that Froch dreads, to end his career losing his crown to Groves, would not carry the prestige of losing to a man already rated amongst the best of the world pound-for-pound.

Another option, which has been mooted these past few days, is a Froch vs. Julio Cesar Chavez Jr. fight. This would be an even harder sell with the public for Froch. Other than his huge Mexican fan-base, Chavez brings little to the table, having failed to score a meaningful win at 168, and looked very poor in his last fight against Brian Vera. However, a Froch vs. Chavez Jr. bout would most likely still sell well in America, but there is little doubt that Froch’s British fans would be far from satisfied if he decided to go down the Chavez Jr. route. Indeed, it would look like a case of ’The Cobra’ taking the easiest option on his way out of the hardest game.

Perhaps one question should be whether Froch cares, as much now about how he is perceived by the fans, and the legacy that he leaves behind when he chooses to retire. It is possible that Saturday’s experience, and hearing himself booed by 20,000 people after he had just spent the best part of forty minutes fighting for his life, may well have changed the champion’s outlook. Could Froch really be blamed if he now took the easiest route available for him to have one more big payday and then get out while he is still in one piece? Especially when a second fight with Groves looks to be so potentially risky and damaging.

Froch has always had a rather fraught relationship with Britain’s boxing fans. Early on in his career ’The Cobra’ was largely ignored, despite winning the domestic championships, and steadily propelling himself up into the world rankings. When he did get attention, he was usually faulted for his low held left hand, lack of defence, and slow, rather clumsy style. It was only after Froch won the World super-middleweight title in 2008, after an epic fight with Jean Pascal, in what turned out to be the first of a five-year run of exciting world championship fights, that Froch began to gain the affection and recognition which he craved. In the five years since the Pascal fight, ‘The Cobra’ has taken part in a string of high quality world championship contests, which mark him out as one of Britain’s most exciting fighters of modern times. It is a reputation that Froch has coveted up until now.

Then came last Saturday, and the phrase ‘hero to zero’ may well have run through Froch’s head at some point in the past few days. While there is little doubt that the fight was stopped prematurely by referee Howard Foster, and that the judge’s score cards have poured fuel on the simmering sense of injustice, it is also true that the treatment of Carl Froch by the 20,000 spectators post fight, and by many in the days since, has been cruel and unfair.

While a win for Froch in a rematch against Groves would be a great asset for Froch, a loss to Groves would be potentially career ending and scupper ‘The Cobra’s’ ambitions of an Andre Ward rematch. ‘The Cobra’ must balance the risks of taking on Groves, against the long term risks of avoiding a rematch, and always having to live with that factor in his legacy. It depends what does Froch view as the worst scenario, a Groves’ win or Froch being accused of ducking him.

So now ‘The Cobra’ finds himself at the crossroads, as he seeks to end his career on his own terms. Should we blame him if he perhaps decides not to give the public what they want this time, but instead to do what is best for him? It is a puzzle to which only he will be able to find the true answer.