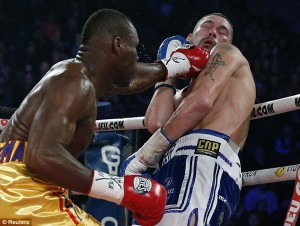 The usually rough and rugged Bellew tried his hand at boxing and moving, but was only successful at delaying the inevitable as Stevenson walked him down, looking for opportunities to pounce.

Stevenson, the Haitian-born Canadian, worked with the confidence of someone who knew that he was clearly superior to his rival and eventually began landing the big shots needed to take control of the bout and end things. And Bellew, a good regional talent from the UK, had nowhere to go but down when Stevenson began to crank things up.

A Stevenson left hand midway through the sixth round dropped Bellew and signified the beginning of the end for the game Brit. After beating the count, Bellew was immobilized up against the turnbuckles by another Stevenson left hand that had the referee rushing in to stop the bout.

After an uneventful first round, the Russian WBO champ, Kovalev, came out with brutal precision. Sillakh worked to stay mobile and play it smart, but was beaten by Kovalev’s calm, cool, and deceptively well-rounded offense.

Early into the second round, Kovalev landed a big right hand that dropped Sillakh.

And even though Sillakh would beat the count, the fight was all but over as a Kovalev, keen for the kill, quickly pressed for the stoppage. Moments later, another Kovalev right hand would drop Sillakh hard and temporarily remove the one-time blue-chipper from his senses.