Hello friends and family, I’d like to first thank Al Haymon for this Sunday Brunch, with him all things are possible. Welcome back to big fat New York-style, oil down to your elbows, always folded in half – proper pizza edition of boxing’s number one Sunday food themed pugilistic publication. This week we’re going to be taking a look at the origins of the Teenage Mutant Ninja Turtles and whether or not Kit from Knight Rider had any other “special” attachments that we weren’t privies to…you know what I mean. Aside from that, we will take a leisurely jaunt through the gigantic night of boxing that went across several cards and a few different 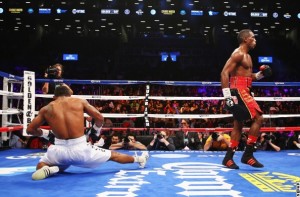 broadcasting conglomerates, perhaps concluding the proceedings with one of several tips, tricks or codes. With that being said, I gave you your instructions in the dressing room, what I say you must obey – Cuidate, escucha me, toca los manos y buena suerte…Let’s get it on!

The very thing that many members of the mainstream media consider a weakness in the Cuban refugee, Erislandy Lara turns into an asset and translates that into (bad judging aside) victories. His poise and patience are very much deliberate, even if not appreciated by all. Lara has a level of sophistication about the way he operates in the squared circle that is equaled by a very small group of fighters. On Saturday night, Erislandy “El Oro De Guantanamo” Lara completely dictated the entire match to New Mexican star, Austin “No Doubt” Trout. Immediately after the bout, the Cuban called for the head of Saul “Canelo” Alvarez; will this win be enough to coax Canelo into another dangerous fight?

In a surprise to some, “Super” Zab Judah just didn’t have the fire in him to be competitive with Paulie “The Magic Man” Malignaggi for more than a few moments of their 12 round main event from the Barclay’s Center in Brooklyn, NYC. One can’t help but be disappointed by post-fight comments where Judah defiantly claimed that “He [Paulie] wasn’t tougher than me. He stayed on the outside and didn’t engage.”

As for “The King of Brooklyn” (whatever that means), Paulie moves on to bigger and better paying things. His recent alliance with boxing’s mysterious omnipotent, omnipresent cash organizer, Al Haymon means that Malignaggi’s win on Saturday was crucial and will likely lead to a big PPV fight for him in the coming 2014 calendar year. If Saturday’s victory somehow led the “Magic Man” into a mega fight with Floyd Mayweather Jr., that would truly be some mighty wizardry, indeed; alas, he shall not pass.

The newly retooled “Mandingo Warrior”, James Kirkland managed to overcome a few painful moments early against New Jersey’s Glen Tapia and pound him senseless by the sixth round, prompting referee Steve “I Shoulda Stopped It Sooner” Smoger to finally put a halt to the beating.

Kirkland recently re-joined forces with Miss Anne J Wolfe prior to his last fight. At first it seemed as though the tough as nails trainer, Wolfe may over-exert James in camp in order to whip him into her desired form. While James still lacked some serious defense, he was as powerful as ever and the brutal relentlessness that he displayed lends a bit of credibility to the statement ‘James Kirkland is back’.  One would assume that a match with one of the power players in the division is next for the Texan, perhaps the Cuban Erislandy Lara will be tabbed by the powers at be for the fight.

Accuracy, economy of movement, master of distance – These things come to mind when witnessing the marvelous Guillermo Rigondeaux perform. Perhaps one of the most talented fighters in the last 20 years, Rigondeaux is the very height of Cuban boxing and it’s extremely difficult to envision a situation where “El Chacal” loses to anyone within ten pounds of his bantamweight division. Unless Nonito Donaire somehow avoids a rematch with the unstoppable Rigondeaux, expect to witness a virtual dearth of competition in the Cuban’s immediate future.

One of the more interesting characters in the welterweight division, Devon Alexander manages to disappoint, underachieve and aggravate all at the same time. Perhaps due to his incessant yelling at the end of his punches (which were sloppily fired off in a paltry attempt to fool ringside observers that he was being competitive with young gun, Shawn Porter), Alexander “The Great” looked far from great and Porter wound up looking like the champion and Devon Alexander, the rookie challenger.

Post-fight, Alexander would tell Showtime’s Jim Gray “I couldn’t get off. I didn’t fight him as I’m supposed to. I mean, you know he’s coming in head butting, but never mind that. He got the victory. You know I’m disappointed, though. I was supposed to capitalize off him running in…” Ironically enough, Devon Alexander was the one who was actually running straight into Shawn Porter’s short punches all night long. Hopefully Alexander can learn from this defeat and make the necessary adjustments (that probably should have been made several fights ago when he was awarded a few controversial decisions) to put him back in the winning column.

This week we’re going to be whipping a super simple peanut butter and jelly cereal treat! Start off with one bag of standard, non-generic marshmallows and one half a stick of full fat butter. Melt both over a medium high non-stick pan. When melted and mixed together completely, add in two cups of Reece’s Peanut butter Puffs cereal and take off the heat immediately. Once these are thoroughly incorporated together put the mixture out on a buttered (or sprayed) pan to about a inch and a half in height and let cool at room temperature.

Take your favorite peanut butter (I recommend Skippy or Peter Pan) and place in a blender with 50% quantity tapioca maltodextrin and blitz for 30 seconds in 5 second increments. Take the resulting paste and push (with a flexible bench scraper) through the mesh of a tamis. Voila, peanut butter powder. Set aside and put a small sauce pot on the fire. Put one small basket of hulled, fresh strawberries in the pot and mash with a fork, let cook on low heat until all their juices have come out and the mixture is bubbling slowly. Add 3tbs granulated sugar and let cook for a further 15 minutes on low heat. Remove from the heat and add a pinch of salt, a squeeze of fresh lemon juice and a table spoon of balsamic vinegar. You should have a strawberry balsamic sauce as the result.

To plate, cut your peanut butter cereal treat into a square or to your desired shape, place on your dish with the strawberry balsamic glaze and the peanut butter powder and you have a super simple, easy to make desert treat!

Thanks for joining us again this week, we’ll be back next time with more randomly assembled catch phrases, one-liners and Japanese curse words. Please send all hate mail regarding my stance on Devon Alexander’s head to Jesseboxingtribune@gmail.com Donations are also accepted at the same address. Until next time, team, santé.