Hello team and welcome back to the most wildly coveted, historically accurate Sunday boxing column South of the Yangtze River in China. This episode we’re going to do the exact opposite of what most major boxing websites do on a slow news week and not make some crap up for you to read – just to fill space. This time we will be taking a quick peek at one of Freddie Roach’s pupils and perhaps what is next for him, also, is Manny Pacquiao positioning himself for a Floyd Mayweather fight? Nope! Not this year, anyway. We’re going to look at what the Filipino fireball had to say for himself on the subject of the pound for pound king. Manny’s trainer, Freddie Roach had some quite damning things to say about a certain strength and conditioning coach and you can bet your sweet tits we’re all over it. Finally, we will conclude the proceedings with a rendition of Cats the musical performed by the Trans-Siberan Orchestra’s next door neighbors. We may skip that last part…With that being said, I gave you your instructions in the dressing room, what I say you must obey – Cuidate, escucha me, toca los manos y buena suerte…Let’s get it on! 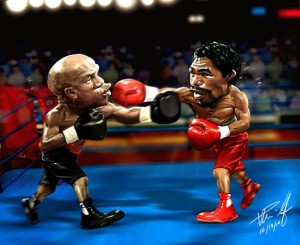 Much has been said and reported about the possible matchup between the sport’s two most recognizable figures this year. Between all the false reports and phony match-makers it can get a bit confusing to what actually is going on, so we’re going to clairify it for you right now.

In a recent interview Manny Pacquiao had this to say regarding a fight with Floyd Mayweather:  “First, I would like to make it clear that I am not chasing him. If ever, I want to face him in the ring for boxing fans, in particular and sports fans in general. That fight is what everybody wants; that’s history in the making and I want both of us to be part of history…”

History indeed; the problem with this situation is that it’s 2014. Surely it can be argued that the height of this matchup, the point of prime interest would have been a few years ago, prior to the devastating loss Pacquiao suffered at the hands of Marquez at the end of December, 2012. Still, it remains the most intriguing prize fight to fans and media alike. The Filipino hero would continue to clarify his position:

“Let’s forget about it for the meantime. For the last four years negotiations for the fight have been on and off and nothing had come out. He’s been asking for so many conditions which we have expressed intentions to abide by like drug testing, purse split and everything. Now he wants me to separate myself from my promoter – which I cannot possibly do without violating my contract.”

While it is true that Top Rank retains control over Manny like a puppeteer over his marionette during the 2014 calendar year, their long standing contract will, in fact expire at the end of the year, leaving plenty of room for the mega-money matchup in 2015. Floyd Mayweather, should he choose to honor his remaining Showtime contract, will have two fights this year and two more in 2015.

Speaking about Freddie Roach, the former Trainer of the Year had some very interesting things to say about his prior employee, strength and conditioning coach, Alex Ariza. As many know, Ariza and Roach had parted company on bad terms (which came to a head in China when Ariza heel kicked Roach on Youtube during an altercation in a shared gym) and the Argentine coach flipped camps to work with Pacquiao’s then next foe, Brandon Rios. Also common knowledge now is that Rios failed his post-fight drug test as well as the fight.

For years, accusations have been thrown about from every corner of the internet about Manny Pacquiao’s rise in weight and power. With Alex Ariza, Pacquiao went from 2/5 knockouts or technical stoppages in his last five fights at a lower weight (super featherweight) to 4/5 knockouts as high as 15 pounds north of 130. These statistics are obviously not proof of anything either way, just food for thought as we chew on Freddie Roach’s next few sentences…

“I know he [Marcos Maidana] has a new strength coach and I don’t get along with the guy. One of the reasons why he doesn’t work for me anymore is because I think he’s a little shady, you know?” At this point, feel free to crack a beer and zap some popcorn if you’re so inclined. “He used to give Manny a drink every day before we worked out and I asked him ‘what was in the drink?’ and he would never tell me. I said ‘I need to know what’s in that drink because, you know, you’re giving it to my fighter and if something goes wrong I’m going to get the blame.’. In my opinion, he’s a little shady. So he’s with that camp now and it doesn’t surprise me that it happened [Rios’ failed test].”

“Everyone has their suspicions there because it’s very unusual for the strength coach to be that close to the fighter. I mean, usually a cutman will work on a cut, that’s a possibility, but he’s very forceful. I was surprised that Robert Garcia (Maidana’s trainer) let him in the corner actually, because in Macau, he didn’t even let him work the corner.”

The delicious footage can be viewed here http://www.youtube.com/watch?v=fWw-FUSMy6E enjoy!

I recently had a chance to review Lateef Kayode’s heavyweight excursion and suffice to say my vote is he move back down to cruiserweight. It’s my professional opinion that “Power” Kayode spend less time with the Prince of Zamunda, indulging in the pleasures of cheetah filet and zebra “surprise”, and go back to cruiserweight. Kayode is far too slow at the weight and hasn’t really the power to be effective – especially with the super heavyweights out there – and isn’t a fight with one of them ultimately the goal of any heavyweight?

Instead of telling you what I thought about Kayode’s latest fight and how I think that (his opponent) Jonte Willis should fight in professional tough man contests, or perhaps take up major league eating in lieu of professional boxing (I’m sure there’s a warm seat next to Cookie Jarvis just waiting for him), I will just tell you the equivalent of self-mutilation I would rather endure than watch these two trapped in a ring together again.

I think that in this scenario I would rather dip all ten of my fingers in liquid hot magma (think the end of T2) so I would be left with cauterized stumps, unable to click away from this atrocity of a heavyweight slow-motion fight. That pain, that crippling anguish and embarrassment would be on par with having to watch that fight again.

Anyone who still chants the dreaded anti-axiom of boxing – that it is dead…should honestly be kept far, far away from Lateef Kayode’s heavyweight excursions.

Thanks for joining us again this week, team we have been unexpectedly shifted to the number one position by the WBC! We’ll be back next Sunday with another episode of Boxing’s number one weekend source for video game reviews, kung fu medicine and critiques of fine dining critiquers. Until next time, santé.