Adrien Broner (27-1, 22 KOs), after suffering a most humiliating and decisive first career loss at the hands of Marcos Maidana (35-3, 31 KOs) last December 14, has decided to exercise the rematch clause he had in his contract. 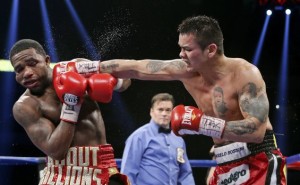 The rematch, a bid for Broner to recapture the WBA welterweight belt he lost to the heavy-handed Argentine, will be aired on Showtime and take place on either April 19 at the Alamodome in San Antonio, Texas or on April 26 at a venue to be named in Los Angeles.

“[Broner] talks the talk and he walks the walk,” Golden Boy CEO Richard Schaefer told Boxingscene. “He wants to show what he’s all about. And what he wants to do before he entertains anything else, is to set the record straight…I’m sure that he analyzed the first fight and knows what he needs to do for the [rematch] not to become a repeat. His ring IQ is very high and I think he realizes that certain things did not work…I’m sure he feels that he can make the adjustments to go in there and set the record straight and then go on to bigger and better things.

“Is it dangerous? Hell yeah it’s dangerous. It’s like playing with fire.”

The decision to stage the rematch effectively removes Maidana from possibly landing a big money May 3 bout against Floyd Mayweather at the MGM Grand in Las Vegas.