Four-division former world champ, Erik Morales (52-9, 36 KOs) will return to the ring for the first time since being knocked out in four rounds by Danny Garcia in October, 2012. The future Hall of Famer will meet second-generation fighter, Jorge Paez Jr. (37-4-1, 22 KOs) in a twelve-round contest, presumably in the welterweight division, at the Arena Monterrey in Monterrey, Mexico. 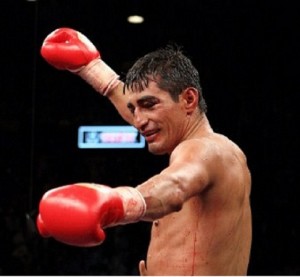 Morales, aside from being knocked out by Danny Garcia in his last bout, had also tested positive for the banned substance clenbuterol in the days leading up to the contest. To the dismay of fans and media alike, Morales was allowed to go ahead with the fight as long as Garcia was also willing to keep the fight alive.

Five months after this disgrace, the USADA, which oversaw the testing, issued a statement that they would be banning Morales from competition for a period of two years.

Morales laughed off the sanctions and vowed to return to the ring whenever he liked, likely in Mexico. The USADA’s proclamation, had it been challenged, may not have held up without state commission backing and Morales, if he had wanted, probably could have found a state to sanction his return to the ring.

Instead, the 37-year-old “El Terrible” has opted to avoid any potential legal conflicts and fight in his home country.

Loser in three of his last four, Morales will still likely be favored over the 26-year-old Paez Jr., a fighter with very modest talents, a history of conditioning issues, and a comparatively weak resume.

At best solid, but nowhere near exceptional, Paez Jr.’s biggest wins have been two hard-fought decisions over Omar Chavez and a unanimous decision over a faded Jose Luis Castillo.