IBF junior middleweight champion, Carlos Molina (22-5-2, 6 KOs) will make the first defense of his title March 8 on the Saul Alvarez-Alfredo Angulo PPV undercard at the MGM Grand in Las Vegas. 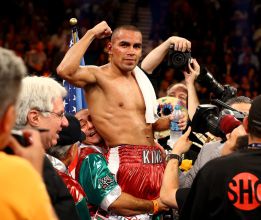 Molina, who took the title from Ishe Smith via tedious and dull split decision on the Mayweather-Alvarez card in September, is an unlikely world champ and dedicated spoiler in both style and temperament.

The 30-year-old Chicago resident was born in Patzcuaro, Michoacán, Mexico and has traveled the most unlikely of paths en route to main stage boxing recognition.

Molina first made headlines as the victim of a screw job draw against Julio Cesar Chavez Jr. back in 2005. He would go on to lose a rematch to the second generation star via majority decision and then lose two more bouts to begin a career path that suggested journeyman gatekeeper more than future world titlist.

Gradually, Molina earned his reputation as a true spoiler in the sport. With an awkward style and a growing ring IQ, Molina was able to take upset victories over the likes of Danny Perez and Kermit Cintron while fighting Erislandy Lara to a draw. In a WBC junior middleweight eliminator, a controversial tenth round DQ loss to James Kirkland (in a bout he was winning at the time) cost him his first title shot, but a subsequent IBF title eliminator victory over Cory Spinks, eleven months later, brought him to his title-winning effort over Smith last September.

In recent weeks, rumors abounded as to who Molina would be fighting next. Stories had him close to deals with fighters ranging from Saul Alvarez to Miguel Cotto, but reality has brought him Jermall Charlo (17-0, 13 KOs).

Charlo, a Houston, TX native and one half of the Charlo Twins fighting team (with brother, Jermell), is a 23-year-old prospect with big talent and a thin resume.

Questions could be raised as to how Charlo got his title shot so quickly, especially considering how Molina had to face guys like Spinks, Kirkland, Lara, Cintron, and Perez before finally earning his title shot.

But this is boxing and such question, unfortunately, need not be asked.

Charlo’s career high water mark as a Golden Boy prospect is a second round knockout of journeyman Antwone Smith back in August of last year.

Still, Charlo’s edge in athleticism gives him a solid chance of an upset against a Molina who will look to turn the fight into a grappling match on the inside.

Molina-Charlo will be part of a four-bout PPV on March 8, alongside Saul Alvarez vs. Alfredo Angulo, Leo Santa Cruz vs. Cristian Mijares, and Omar Figueroa vs. Saul Alvarez’s older brother, Ricardo Alvarez.