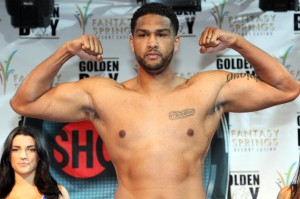 KO’s) – California, USA
The heavy handed US Olympian continues his career building efforts on the under card of a Fox Sports card headlined by the Antonio Orozco-Miguel Angel Huerta and Cornelius Bundrage-Joey Hernandez bouts. Breazeal’s kept a steady pace of fighting just about every two months, keeping busy without moving too fast. Fonseca’s only fought once since 2012; a third round stoppage over Ronny Hale last July.

1/24 – Ronald Hearns (26-4, 20 KO’s) vs. Eddie Hunter (9-9-2, 2 KO’s) – Washington, USA
An eight round under card bout on ESPN’s Friday Night Fights card may or may not get TV time depending on how the main features play out. Hearns is in desperate need of a victory; after being stopped in all of his last three outings, he hasn’t fought since October of 2012. Hunter was 3-1 in 2013 and dealt undefeated Lanell Bellows his first professional loss in December.

1/25 – Rau’shee Warren (9-0, 3 KO’s) vs. German Meraz (46-27-1, 25 KO’s) – Washington DC, USA
A three time US Olympian, Warren’s seen it all as an amateur, and takes on his most experienced opponent to date in Meraz, who’s managed to cram all of his fights into just nine years as a pro. This bout takes place on the under card of Showtime’s program headlined by Lamont Peterson-Thierry Jean

1/25 – Jamel Herring (6-0, 4 KO’s) vs. Antonio Sanchez (5-1-2, 3 KO’s) – Washington DC, USA
Another US Olympian on the Showtime card, Long Islands Herring puts his undefeated record up less than a month after stopping Lance Williams in San Antonio. In Sanchez, he meets a guy who’s fought twice since 2011, resulting in a draw and a no contest in 2012 and 2013 respectively.

1/25 – Sean Monaghan (19-0, 12 KO’s) vs. Matt Vanda (45-15, 25 KO’s) – New York City
On HBO’s Mikey Garcia-Juan Carlos Burgos under card, Long Island light heavyweight Monaghan, the WBC Continental Americas light heavyweight title holder, steps in with an experienced fighter when he faces a Vanda: a 17 year pro who’s just about broke even in the win/loss columns over the last 10 years. He’s faced plenty of top opposition, and has only been stopped twice.

1/25 – Travis Kauffman (27-1, 20 KO’s) vs. Vincent Thompson (13-1, 2 KO’s) – Pennsylvania, USA
Kauffman’s been working hard and staying busy just waiting for his big opportunity, winning nine fights and the WBF Intercontinental heavyweight title since his lone defeat to Tony Grano in 2009. He chased a rematch for bit, but he’s moved on. Thompson’s looking to get back in the win column after suffering his first defeat to Charles Martin last September.

1/26 – Howard Eastman (47-12, 37 KO’s) vs. Dereck Richmond (3-0-1, 3 KO’s) – Georgetown, Guyana
Once a top middleweight contender, the 43-year-old Eastman is still chugging along. The former European champ didn’t have much success at the world level and has had a steady decline since losing to Bernard Hopkins in 2005. He scored an eight round win his last time out, but dropped six prior contests. Richmond holds the Guyanese super middleweight title.