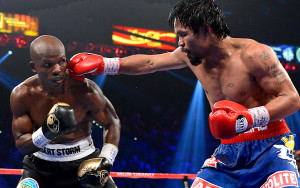 The bout would be a rematch of a highly-controversial June, 2012 meeting that resulted in Bradley taking the WBO welterweight title from Pacquiao via dubious split decision.

Controversy would erupt after their bout and calls of a fight fix had fans and media attempting to lean on the Nevada State Athletic Commission to provide some sort of explanation or correction of the two 115-113 scores in Bradley’s favor. (Most informed observers had Pacquiao ahead comfortably with The Boxing Tribune’s 117-111 tally for Pacquiao being a general consensus score). In a bit of jaded levity, even Bob Arum called for an investigation into the botched scoring.

Ultimately, the scores of Duane Ford and CJ Ross were allowed to stand and the bout remained an official loss for Pacquiao.

In the immediate aftermath of the bout, Pacquiao balked at exercising the rematch clause in the fight’s contract, claiming that fans already knew who won, and both fighters moved on. Subsequent attempts to make the rematch were held up in negotiations over Bradley’s asking price, which was reportedly as high as $10 million.

However, with options running out for the Filipino legend, a Bradley rematch was the only real match to be made and there was little doubt that every effort would be made to sign it. (Details have yet to be released as to the guaranteed purses of both fighters)

The 35-year-old Pacquiao is 1-2 in his last three fight, but is coming off a one-sided beating of Brandon Rios in Macau, China.

The 30-year-old Bradley had a very solid 2013, beating Ruslan Provodnikov in March via close, unanimous decision in the consensus Fight of the Year and then taking a split decision over Juan Manuel Marquez seven months later.