In an all-out slugfest between minimum-weights, Oswaldo Novoa (13-4-1, 8 KO’s) stopped defending champion Xiong Zhao Zhong (22-5-1, 12 KO’s) in the fifth round to win the WBC minimum-weight title. 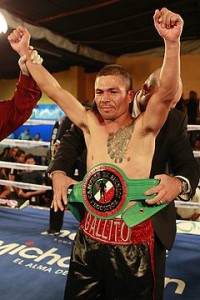 The Mexican challenger was aggressive from the start, as he and the champion went toe-to-toe, with Zhong steadily losing ground as the bout wore on. The pressure was finally too much for Zhong to handle, and referee Bruce McTavish stopped the bout in the fifth frame.

Xiong Zhao Zhong was Chinas first professional world boxing champion, and was making his third title defense. He won the vacant title with a 12 round decision over Javier Martinez Resendiz in November of 2012 and made two successful defense sin 2013; a 12 round decision over Denver Cuello and a fifth round TKO over Lookrak Kiatmungmee. He has also held the WBC Silver light flyweight title as well as the WBC Asian Boxing Council and IBF Pan Pacific light flyweight titles.