On February 28, eight middleweights will congregate in Hammond, Indiana for the quarter finals of ESPN’s 2014 “Boxcino Tournament”. Among them will be Brandon Adams of Los Angeles, California (12-0, 8 KOs), who takes on veteran Daniel Edouard (23-4-2, 12 KOs) for a chance to advance to the semis. 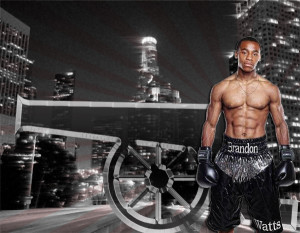 Growing up, Adams was one of nine siblings raised by his mother in the rough neighborhood of Watts, L.A. (known for the 1965 Watts Race Riots). In recent years, Watts has been marred by Bloods and Crips gang violence; which a young Adams refused to be a part of.

“Where I lived was very territorial and I felt a lot of pressure [to join a gang],” said the 24-year-old. “But I saw the flip-side of living as a gang-banger and going to jail. Some of my friends lost their lives and I realized that it wasn’t for me.”

Instead, Adams chose to help his mother care for his brothers and sisters in the poverty stricken Watts.

“I didn’t recognize how bad it was because I lived it, but looking from the outside in, it wasn’t good,” said Adams. “I mean, we had one of them families who didn’t know how poor we were. But even if there was no food in the house, my mom still found beans and rice for us to eat.”

Adams took up boxing at age 17 and soon thereafter was introduced to trainer Dub Huntley, who was the inspiration for Morgan Freeman’s character in “Million Dollar Baby”. After just six amateur fights, the pair became frustrated at their inability to find quality opponents and made the leap to the pro ranks in 2011.

With only 12 pro fights, the undefeated middleweight still considers every bout to be on the job training. And to help make up for his lack of experience, he’s sparred with world class boxers like Carlos Molina and Freddie Hernandez. Edouard on the other hand has been in big fights before, having faced the likes of Jermain Taylor and Peter Manfredo Jr.

“I think Edouard is a good fighter,” Adams said. “He’s a good test for me. He’s definitely going to be the toughest fighter I’ve ever fought in my career and I feel like overcoming him will solidify me in the tournament.”

Under normal circumstances, a boxer would have a fight scheduled and win or lose wouldn’t necessarily know what’s next. In a tournament however, there’s a map that shows the road you must take to win it all. This can cause a pugilist to look ahead of his immediate opponent; a problem that Adams says will not affect him.

Along with his trainers, Adams credits his wife for keeping him focused. The couple is expecting their first child later this year; a journey which he describes as humbling. He also looks forward to becoming the father that he never had.

“My wife keeps me on a straight line, she supports me and has been my back bone,” said Adams. “Being a father is something that I’ve always wanted to be. I’ve never had much of a father figure in my life, so I’m going to do everything I possibly can to be the best father that I can be.”

If Adams can win this tournament, it would add to what is already a big year for his blossoming family. When you look beyond his lack of amateur and pro experience, and see what it took for him to get here, you’d be hard pressed to find anyone who wants it more.

“Aw man, I believe winning this tournament can catapult my career,” said Adams. “It’s going to change my life. All the stars are aligning right.”