A verbal agreement has been reached for former super-bantamweight champion Nonito Donaire (32-2, 21 KOs) to challenge current WBA featherweight titlist Simpiwe Vetyeka (26-2, 16 KOs) on May 10 in Macau, China; according to Vetyeka’s 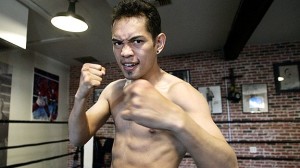 This will be Donaire’s second fight since losing his WBO 122-pound title to Guillermo Rigondeaux last April. After the defeat, Donaire took seven months off to recover from shoulder surgery and welcome his first child with wife Rachel. He returned in November and scored a TKO victory over Vic Darchiyan in round 9 of their grudge-match.

Vetyeka became champion in December, when he handed Chris John his first defeat by forcing the Indonesian legend to retire on his stool in round 6 of their title fight.

Donaire-Vetyeka will be promoted by Bob Arum’s Top Rank.