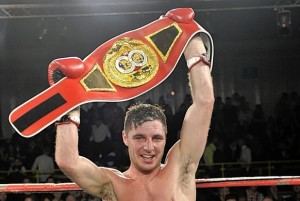 With his sights set on IBF Inter-Continental lightweight champion Kevin Mitchell, the Hull native knows he has to prove himself first, “I need to come through a really hard test” Coyle told the Hull Daily Mail, “and Eddie (Hearn, Coyle’s promoter) says if I can do that against Brizuela then I’ve proved I’m worthy of taking on Mitchell.”

Working his way up the lightweight ranks, Coyle has held the BBBofC Central Area and WBC International Silver lightweight titles prior to his current title reign. In July he lost a shot at the Commonwealth lightweight title when he was stopped in 10 rounds by Derry Matthews.

Brizuela is coming off a loss in an IBO light weight title bout to Daud Cino Yordan seven months ago. His only other defeat was in 2009; a first round stoppage to Daniel Dorrego that cost him the WBO Latino lightweight title.

On the under card, 2012 Olympic gold medalist Luke Campbell (4-0, 3 KO’s) fights in his first scheduled eight round bout against Scott Moises (8-8-1, 2 KO’s). After stopping his first three opponents, the 26 year old prospect was taken the four round distance in his last outing: a four round decision over Chuck Jones last November.