Last week, when Floyd Mayweather (45-0, 26 KOs) picked Marcos Maidana (35-3, 31 KOs) to be his next opponent; his protégé Adrien Broner (27-1, 22 KOs) was left without a match. “The Problem” planned on avenging his December loss to the Argentinian by exercising a rematch clause that at first apparently didn’t exist, but later magically appeared. 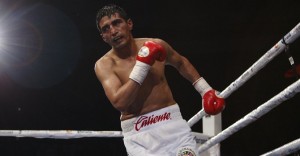 Assuming that Broner’s consolation prize is a lucrative spot on his mentor’s undercard; who’s out there for him to fight?

The latest rumor is that Amir Khan (28-3, 19 KOs), who’s left out in the cold after assuming that he himself was next in line to fight Mayweather, could now oppose Broner. Since both are without a foe and hover around the same weight class that would be the obvious move to make. Then again, why would Golden Boy Promotions have two of its most marketable stars fight each other at this point in their careers, without a title at stake?

Those who point to last year’s Danny Garcia-Lucas Matthysse bout as proof that such an undercard dream match can happen; forget that Matthysse was Garcia’s mandatory, making it an almost unavoidable bout.

So far, one glaring omission from the Cinco de Mayo weekend event is a Mexican star. There’s no doubt that the bill needs someone who appeals to boxing’s largest fan base. The last three times Mayweather headlined the holiday, there was a heavy Mexican presence on each undercard.

That leaves us with Broner in need of an opponent and a pay-per-view in need of a high profile Mexican boxer.

Here comes the punch line. We’re sitting at a bar with Adrien Broner and in walks Eric Morales; funny right? No, not at all. But it is peculiar that just days after Broner’s schedule opened up, Morales pulled out of his March 22 fight with Jorge Paez Jr. And what better way to help Broner regain his confidence than to place a washed up future Hall-of-Famer in front of him on such a grand stage.

Morales has lost three out of his last four fights and tested positive for a banned substance prior to being knocked out by Danny Garcia 16-months-ago.

Let’s hope that a Broner-Morales clash isn’t being considered. But anything’s possible in a sport where promoters often try to sell you a Ford Pinto, all the while telling you that it’s really a Mercedes Benz.