MMA champion Ronda Rousey (9-0, 1 KO, 8 SUB) has been the talk in boxing circles thanks to her recent comments about feeling she could be the one to beat boxing’s pound for pound king, Floyd Mayweather Jr. (45-0, 26 KO’s). Of course, Rousey was referring to a mixed martial arts contest and not a boxing match; usually the case 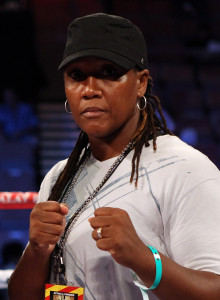 when MMA combatants make these type of claims. The scenario however, is irrelevant to former light heavyweight champion Ann Wolfe (24-1, 16 KO’s).

In a video interview posted on Boxingscene.com, Wolfe was asked by Ryan Burton about Rousey, and stated flat out, “I’d fuck Ronda Rousey up!” When asked whether she was referring to MMA or boxing, Wolfe continued, “I don’t give a fuck, we can meet in the streets. I don’t disrespect her or nothing, but I’d tear that ass up”.

Noted by many as the hardest punching female boxer ever, Wolfe is the former IBA and WIBA world champion in the light middleweight and light heavyweight divisions. She also held the IFBA title as a light middleweight and super middleweight as well as the NABA super middleweight title. Her lone career defeat came in her seventh pro bout against Valerie Mahfood (TKO by 3) which she avenged, defeating Mahfood twice a few years later. Her most talked about performance came when she scored what is referred to as the greatest knockout in female boxing history, when she stopped then undefeated Vonda Ward just over a minute into their world title bout in 2004. A bout against fellow champion Laila Ali was proposed but the fight was never made. Wolfe retired in 2006 and now trains boxers in Texas.

Rousey won a bronze medal in Judo at the 2008 Beijing Olympics. She had a brief amateur stint in MMA, going 3-0 before entering the pro ranks in 2011. In an undefeated career to date (9-0), she’s held titles for both Strikeforce and UFC, and is the current UFC bantamweight champion.

Boxing-wise, it was a light weekend for the women, with just a handful of regional titles up for grabs.
In Argentina, Cecilia Sofia Mena (8-1-1, 4 KO’s) picked up two titles; defeating Antonina Ayala Vazquez (12-10-3, 3 KO’s) by 10 round decision, the Argentina featherweight champ added the WBC Latino and South American featherweight titles, both of which were vacant. Since losing a four round decision in pro debut in 2011, Mena has been unbeaten since. This was Vazquez’s first title opportunity; she’s lost three of her last four bouts.

A scheduled eight round contest in Japan awarded the vacant OPBF bantamweight title to Tenkai Tsunami (20-9, 9 KO’s). Tsunami, who’s won just two of her last eight fights, stopped Honey Mae Bermoy (6-3, 6 KO’s) in the seventh round to take the honors.

Linda Laura Lecca (9-2-1, 3 KO’s) won the vacant WBA Fedelatin super bantamweight title with an eight round decision over Maria Vega (7-1, 4 KO’s) in Peru. Lecca was coming off a failed bid for the WBO super flyweight title in January.

WBC orders Juarez vs. Munoz
Mauricio Sulaiman Saldivar, President of the World Boxing Council, had ordered a bout between Mariana Juarez (39-7-3, 16 KO’s) and WBC super-flyweight champion Zulina Munoz (41-1-2, 26 KO’s). Munoz won the vacant title in November of 2012 and has made five successful defenses with four of those bouts ending inside the scheduled distance. Juarez is a former WBC flyweight champion, and the current WBC International super-flyweight title holder.