After an unexpected couple of weeks removed from Netflix, I bring to you the good news of Knuckle for this week’s “I Watched it on Netflix.” As usual, I’m picking a boxing-themed movie from the available streaming movies available in order to fill an evening or two in the long stretches between fights. Usually these movies are bad, so I’m happy to say that Knuckle is absolutely fascinating, especially if you liked Wild and Wonderful Whites of West Virginia.

Knuckle is a documentary about feuding clans of Irish gypsies who settle their differences through ritualized bare-knuckle boxing. This a culture 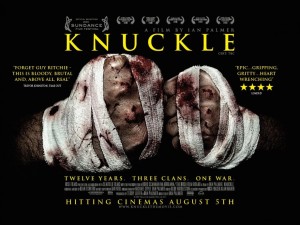 I know virtually nothing about except that I remember the gypsy lady-fight in From Russia With Love, and I really liked Brad Pitt in Snatch. Director Ian Palmer follows the Brad Pitt variety for a span of about 12 years as these two clans of cousins instigate fight after fight after fight, for reasons that apparently go back decades.

If you can’t turn away from looking at crazy bizarre train wrecks, then this is the movie for you.

Revel as a feisty Irish grandpa “Big” Joe Joyce, taunts his cousins, the hated Quinn McDonagh clan, via video tape and despair at the sight of him actually backing up his words with fists.

Marvel as James Quinn McDonagh bests Joyce after Joyce to the growing frustration of the Joyce family.

Of course when the fights do happen, they’re by crazy backyard rules, so fights go for one big, giant, never-ending round that only stops when one guy says he’s had enough, both fighters agree to a draw, or if somebody gets disqualified. You’re not going to get pro-boxing here. Some guys have some decent club level skill, but these fights are very ugly and can apparently go on for hours.

In one of the early fights shown, James Quinn McDonagh’s little brother, Micheal, engages in a fight with a very fat man from the Joyce family (aptly called “Big” Paul) and it’s an awful sight. Micheal is way too tiny and “Big” Paul just leans on him and smothers him the entire time and nobody throws a good punch the entire scene. Micheal eventually gets disqualified for biting which is gross when you see what “Big” Paul looks like.

Still, it’s real stuff. Real, fighting, sure, but the other stuff isn’t made up either, which makes it so fascinating. These people are pretty screwed up. Supposedly there’s a reason why these two families hate each other. If you ask the guys who are wrapping up their fists why they’re fighting, they’ll tell you that some person from another family sent them a video, calling them out and insulting the family. Usually the insult is that you can’t trust a Joyce/Quinn McDonagh, and that they’re “no good”. We get to hear a few stories about how so-and-so got rowdy and rude in front of a pub and so that’s why they’re fighting. We get to see videos of drunk Joyces/Quinns McDonagh hollering into cameras how the other family is shit and how they’re also “no good” and definitely not to be trusted.

Then it’s settled in some dreary country road, or a trailer park back yard, or a parking lot in the middle of nowhere, and two guys try to hit each other until the other person can’t take it anymore and a lot of people from neutral clans show up and watch and holler. It’s pretty interesting, especially considering that the actual reason these people are fighting is because a Quinn McDonagh killed a Joyce in a fight at a wedding… in like the early 90’s. Aside from undefeated James Quinn McDonagh and Big Joe Joyce, it seems like there isn’t anyone from back then, still fighting, that even has a personal stake in the feud.

Of course, there has to be another reason why they’d fight, and that’s probably the large amounts of money that fights like this bring to the clans as they wager on the outcomes. James says he’s retiring after every fight we see him engage in, and then he comes back a couple of years later, citing some dumb video, but then also transporting large sums of cash to be wagered on his winning.

There’s a lot of shots of younger kids sparring each other, and young teens getting into the groove of yelling taunts at another family via video. There are good scenes of wives and mothers and aunts bemoaning the futility of it all, since there’s always something else, or another generation coming around challenging for fights. To these women, it’s a never ending cycle, this feuding and hatred and they wish the men didn’t do it.

They still do it… and I guess the arguments and the videos and that murder could be the reason.

Or maybe it’s all really a self-sustaining money-making boxing economy? Maybe none of these people could give two shits about some murder of a guy they’d never met thirty years ago, and what they like to do is fight and make money. The videos come across as a hassle, a necessary step to get things going and promote a fight, and in the case of “Big” Joe Joyce, they’re a joke. If somebody said they wanted to fight me because I’m “no good,” I’d laugh at them. (Surely there’s waaaaaay better and more specific reasons to want to hit me.) But these fights go on, and the movie that seems to be about whether James can resist fighting again (and thus stopping this absurd cycle) turns out to be about Micheal, looking for redemption after his biting disqualification.

Micheal is driven by a desire to prove that he isn’t that loser who lost to the fat guy for biting. He’s obsessed with redeeming himself and is a nice turn for the story, especially since it’s around this time, looking at Micheal with his tribal tattoos, standing in front of a rebel flag, and hitting a heavy bag hanging in the kitchen of what appears to be a condemned building that it dawned on me: Oh, these people are white trash.

So sure, there’s interesting cultural things to be seen and observations to be made about cycles of violence. You could probably talk about it being a microcosm of ethnic violence in the Balkans, and you could compare the final image of children sparring to the ending of City of God. You could probably talk a long time, if you wanted, about the fascination with watching the fights and violence, something that director Ian Palmer (who also narrates the film) says was a sad struggle within himself as well. All of these are totally interesting and valid conversations I’d love to have.

And we can also talk about how fun it is to watch white trash people do crazy things for the sake of family honor, no matter where they’re from.

I highly recommend Knuckle and just had an absolute joy watching it.

Keep in mind that although everyone in this movie speaks English, it is spoken at such a fast and mumbly rate that subtitles are needed and thankfully supplied. This isn’t really a “have playing in the background” movie, you need to actually sit down and watch it. Usually I’m pretty good at understanding dialects but there were long stretches that were just gibberish to me.

Oh, there’s some strong language although it’s hard to pick it out of the dialect. And while there’s no nudity, there’s definitely a couple of guys hitting each other without gloves on about every ten minutes.

Say what you like against their crazy culture, but it seems like nobody has been seriously hurt or killed at these fights. They blow off steam, they make some money, and then they do it all over again. I suppose it’s a better system than shooting each other.

Join me next week as I review The Calcium Kid starring Orlando Bloom. This came out post-Lord of the Rings, so it’s possibly not a bad b-movie. Netflix thinks I’ll give it about 3 out of 4 stars, so we’ll see. And as always, feel free to discuss any of these movies or boxing in general with me on Twitter @ogyokyok.