Where, once upon a time, the heavy-handed battler of Puerto Rican descent was thought to be a potential superstar, fate and a couple of ugly beatings have conspired to ruin Cintron’s rise to boxing stardom. 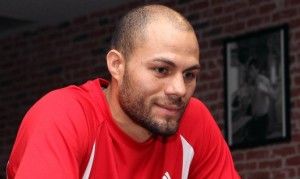 Now a betting underdog of anywhere between +110 to +130, according to MyTopSportsbooks.com, Cintron faces marginal welterweight prospect, Ronald Cruz (20-2, 15 KOs) this Saturday at the Sands Casino Resort in Bethlehem, Pennsylvania, in a true a “do or die” situation.

Cintron, 34, is 3-2-1 in his last six contests and has started absorbing the type of punishment that usually signals the end of a career. A move back to welterweight after being battered and stopped by Saul “Canelo” Alvarez in 2011 has thus far seemed to be a relatively wise move, but it doesn’t take expert analysis to see that most of what made Cintron a special fighter is, simply, no longer there.

Perhaps Canelo Alvarez delivered the final touches to a career in decline since suffering two brutal TKO defeats at the hands of Antonio Margarito, spaced three years apart (in 2005 and 2008).

After the Margarito losses, skeptical eyes were focused on Cintron as he scored a controversial draw with Sergio Martinez in a crazy bout that should’ve really been a TKO loss and, one fight later, outboxed a flu-addled Alfredo Angulo.

But that would be as far as Cintron would go before falling completely from boxing’s good graces.

Defeated via TKO in a strange bout against Paul Williams, where he fell from the ring, and then completely out-hustled by upset specialist Carlos Molina, Cintron was then fed to a 20-year-old Alvarez, who nearly decapitated him in a TKO 5 loss.

Now, Cintron stands as an underdog against a fighter he would’ve been heavily-favored to beat just a couple of years ago. The bout with hometown fighter, Cruz, will be televised on the NBC Sports Network on the undercard of Tomasz Adamek-Vyacheslav Glazkov and looks to be a definite last stand type of bout.

27-year-old prospect, Cruz, has shown brief glimpses of having something special, but has thus far failed to light the boxing world on fire. Back to back losses to gatekeeper/journeymen Antwone Smith and Ray Narh in 2012 and 2013, respectively, tell the tale of a fighter who just may never get past the club circuit.

Still, Cruz is the slight betting favorite for this bout at about -125 because many feel his opponent may be on his last legs. A victory over Cintron would be little more than a moral victory at this point, but it would go a long way in keeping his hopes alive for a chance at making some waves in a jam-packed welterweight division.