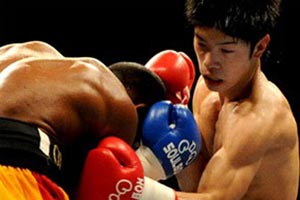 Tanaka is four time national high school champion with a 46-5 (18 KO’s) record. He made his professional debut last November with local promoter, ex-WBC super-bantam champ Kiyoshi Hatanaka, and defeated Oscar Raknafa (12-5, 5 KO’s) by a shut-out, six round decision. Raknafa was ranked the number six minimum-weight by the WBO at the time, and the holder of the WBO’s Asia-Pacific title.

Ferreras is coming off a 10 round decision loss in December, and had a short reign as the interim PABA minimum-weight title holder.