Coliseo Ruben Rodriguez, Bayamon, Puerto Rico– Delivering disappointment from top to bottom, Golden Boy Promotions floated up a stink bomb of a card on Showtime Championship Boxing Saturday night that actually had potential to be 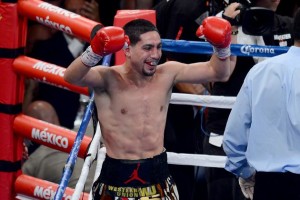 quite the opposite when first put together.

Garcia carried the heavier hands and appeared to be looking for that one big home run to close out the show, but while looking and loading up, Herrera was darting in and out, connecting with plenty of solid shots throughout the bout. One can’t help but wonder what may have happened if Herrera had any sort of one-punch power.

In any case, Garcia was able to successfully defend his WBA/WBC titles and, thanks to open scoring at the Coliseo Ruben Rodriguez, fans had fair warning that Herrera wasn’t going to get the benefit of the doubt in any round that was even remotely close.

Next for Herrera would be a return to basic cable and/or a nice all-action rematch with former questionable conquest, Ruslan Provodnikov. For Garcia, he’ll likely need a “make-good” bout to remove the stink caused by this “stay-busy” bout.

In the television opener, Deontay Wilder (31-0, 31 KOs) kept his KO streak alive with a first round knockout of Malik Scott (36-2-1, 13 KOs) in a bout that raised more questions than the Malaysian airliner disappearance.

After about ninety seconds of lateral movement, the usually nimble and defensively apt Scott suddenly stopped near the ropes, where a one-two– a marginal-looking left hook to the side of the head and a clearly missed follow-up right– sent him down to the canvas.

Unable/Unwilling to get up, Scott ran out the ten count en route to his second loss in three bouts.

As for “Bronze Bomber,” Wilder…he did a somewhat Salsa-like dance in the ring after the KO and jumped on the ropes to rally fan support. Legitimate knockout or not, this win did nothing for the 28-year-old’s overall reputation.

Juan Manuel Lopez (34-3, 31 KOs) revisited his boxing youth of six years ago by once again stopping the rugged Daniel Ponce de Leon (45-6, 35 KOs), this time in the second round instead of the first and after being knocked down in that same second round.