Boxing fans would have a greater tolerance for poor decisions and controversial KOs if they didn’t always seem to happen in favor of the house (or money) fighter.

Contrarians in the reading audience will point to Pacquiao-Bradley I as a high-profile example of the money fighter not getting the painfully obvious poor decision. But, as most of us should know by now, Pacquiao-Bradley is pretty much the lone example of this reverse favoritism, and there are many theories as to why this one fight went 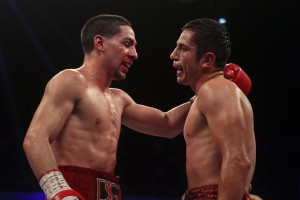 against the usual flow of how things work. That is, however, a topic for another Rant.

Saturday night, fans were treated to the business of boxing at work.

From the moment this Golden Boy card at the Coliseo Ruben Rodriguez in Bayamon, Puerto Rico was announced, the gears were in motion to tell the right story for the headliners. Danny Garcia, the Philly-born junior welter champ of Puerto Rican descent, would be “coming home” to the Isla del Encanto, shoehorned into the role of last great Puerto Rican champ. Heavyweight Deontay Wilder, likely one bout away from a shot at the WBC title, would get an extra big push as a fighter one step away from greatness. And when neither storyline went according to plan, well, they told the story anyway and counted on a weak-willed lap dog media to paint the picture that they were being primed to paint from day one.

As pointed out by Tribune Sunday Bruncher, Jesse Ian Lardies, ESPN’s Dan Rafael had this reaction on Twitter immediately after Wilder’s dubious one-two had sent Malik Scott to the canvas for the full count:

About forty minutes later, though, he had this to say via his official fight report on ESPN:

Wilder, 28, wasted little time notching his 18th first-round knockout. He felt Scott out with a strong left jab and kept pumping it until unleashing a right hand, his best punch. The right hand did not even land flush. Instead it caught Scott on the glove, but was powerful enough to drop him along the ropes, where referee Roberto Ramirez Jr. counted him out at 1 minute, 36 seconds.

“I got power, I got natural power,” said Wilder, the 2008 U.S. Olympic bronze medalist and a native of Tuscaloosa, Ala. “It’s all-natural Alabama power. I’m blessed. My power is crazy. [The right hand] is like a missile.”

Scott (36-2-1, 13 KOs), 33, of Philadelphia, never saw the shot coming as he dropped to 1-2 in his past three fights. The other loss was a highly controversial sixth-round knockout to Dereck Chisora in England last July.

This knockout, however, was not controversial.

It’s anyone’s guess as to what happened in the time between Rafael’s initial outrage and actually putting fingers to keyboard.

In the real world, Wilder landed an “iffy” left hook to Scott’s temple area and fired a right hand that clearly missed. It’s within the realm of possibility that a left hook in that area from a big guy like Wilder, even if delivered without much leverage, could mess with a fighter’s balance. But put into proper perspective, the full story gives much cause for suspicion. Malik Scott is a smart, defensively-apt fighter who was moving effectively, until he chose not to. Wilder’s one-two followed along perfectly to catch a suddenly still Scott.

But perspective was not what we got when we went to supposed mainstream boxing sites.

The Sweet Science’s Michael Woods, who never returned my email questions regarding the Canelo-Angulo promo sweepstakes hustled on his site, had this to say about the bout:

Deontay Wilder didn’t have to break a sweat before he broke a piece off Malik Scott’s chin in round one of their clash in Puerto Rico, on Showtime, on the Danny Garcia-Mauricio Herrera undercard.

A left hook froze Scott and a right hand follow put the loser on his tush. He tried to get up, but his eyes were glassy, and the ref counted ten in this semifinal match, put on by Golden Boy.

Whether you saw the possibility of something nefarious in this bout or not, the dubious nature of the knockdown certainly deserves some mention. (And, yes, Woods did use the word “tush.”)

Instead, there was little effort to tell the real story and great effort to tell the story that Golden Boy wanted told all along. In a couple of weeks, there will be no mention of anything questionable at all and Wilder’s “big” one-two will be recorded in history as an absolute fact.

In the main event of that same card, ESPN2 tough guy, Mauricio Herrera appeared to have outworked and outboxed a sluggish Danny Garcia, but would predictably lose the decision on the scorecards. Thanks to the open scoring in place for this bout, fans had fair warning that Herrera wasn’t going to get the benefit of the doubt in any round that was even remotely close (at least on two judges’ scorecards), so there was little to no shock when Garcia got the majority decision.

Garcia-Herrera was not the most egregious of bad decisions I’ve seen, but I refuse to get into this game of ranking injustices. A botched decision is a botched decision. And, like I said earlier, these would be easier to swallow if the money fighter wasn’t always the beneficiary of these controversial calls.

Just like in the Wilder-Scott bout, though, time and a good amount of media spin will allow this poor call to simply fade away. By the time Garcia is ready to fight again, Herrera will be just another conquest, albeit one who will be universally labeled as “game” and “in it to win it.”

I’m not saying that there’s a conspiracy in place to suppress truth in favor of promoter propaganda, although I’m also not saying there isn’t. What I am saying, though, is that one usually doesn’t get gifted with the big gigs, the big mic, the big platform unless one knows how to play the game. And part of that game is being a cheerleader who will bend over backwards to tell the right story that best serves the sport’s power brokers.

Originally, this Rant was supposed to be about Canelo Alvarez, PPV, and the new business model in the sport. However, Sataurday’s card in Puerto Rico came along and reminded us of just how prevalent the sport’s old business model still is.

You can email Paul at paulmagno@theboxingtribune.com and watch as beard-stroking bloggers everywhere continue to blacklist him and all those who associate with him. You can also buy his book, Notes from the Boxing Underground! Paul is a full member of the Burger King Kids’ Club, a born iconoclast, and an ordained minister in the Universal Life Church.