I watched this movie twice. I started watching it one night, fell asleep, woke up during the last 20 minutes and re-watched it completely. The first time I watched The Calcium Kid, I didn’t think there was much to it, and found the movie to be a 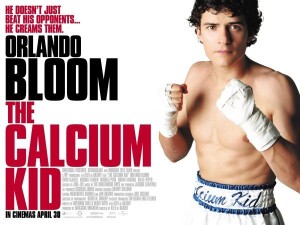 harmless and humorous distraction from other business (sleeping). The second time I watched it, I understood what the Calcium Kid was, and now I’m not as forgiving.

Flashback to my childhood. It’s 1996 and I’m big into John Woo. Hard Target was cool, and Broken Arrow was a miss. Still, I was excited about John Woo coming to America and I was watching everything he put out. One evening, I sit through a made-for-TV action movie called Once A Thief directed by the Hong Kong master himself. It was horrible. It was John Woo-Lite. It was Woo without any of the fun, diluted for a mass audience.

Flash forward to today. The Calcium Kid is a mockumentary about a series of events that culminate in a local milkman fighting for the middleweight championship of the world. It came out in 2004, and it stars Orlando Bloom. I don’t dislike Orlando Bloom. I liked him in all of the Tolkien movies and I thought he was hilarious in the new Three Musketeers film, as well as his guest appearance on Extras. So it’s not necessarily as if I don’t like him or don’t think he’s funny. It’s just that this movie isn’t particularly funny.

The Calcium Kid opens as beloved British brawler, Pete Wright, is preparing for his middleweight unification fight with undefeated Mexican-American, Jose Mendez (Micheal Peña, who I always mix up with Adam Beach). During a sparring session, Pete Wright breaks his hand on Jimmy Connelly’s (Orlando Bloom) head. Turns out Jimmy has a crazy hard punch and absurdly hard bones due to massive milk consumption. Wright’s promoter, portrayed here as a real-life Watto by Omid Djalili, starts thinking of a way to spin this promotional catastrophe into PPV gold by using Connolly as an intriguing, late replacement.

The Calcium Kid is supposed to be funny. It’s supposed to be funny and somewhat gritty and it’s supposed to be exciting. In theory there’s a few different converging story lines that should culminate in something hilarious but it never really happens and ends up feeling more like a stage farce at your local community theatre, with the ensemble gathered in a horseshoe spouting off punchlines one after the other.

And that’s why I bring up John Woo’s foray into television: The Calcium Kid is Guy Ritchie made-for-TV.

I have a feeling that the lower rungs of British cinema were awash with Guy Ritchie knockoffs in the early 2000’s. It must have been a dark and horrible time, similar to our late 90’s with Quentin Tarantino knockoffs. Knockoffs have so much style with none of the influence. So many things happen and people are so witty in these movies… but audiences never seem to care. Guy Ritchie’s influence is in everything the Calcium Kid attempts, the witty narration, the slick edits and the lovable loud characters of the English underworld. The attempts fall short rather quickly, though, and we’re left with a mess that’s not very funny and isn’t a good boxing movie at all.

There was an opportunity to actually make a funny boxing satire here. There are a few times when it almost seems that the film is going that way. I remember sitting up on the couch in anticipation during certain scenes… and soon settling back again and melting into the cushions.

Obviously there are some things you can complain about from the “realism” standpoint. Like, there’s no way anybody would put an amateur with no pro experience at all into a boxing ring with a world champion. Right? There’s a whole sequence where Orlando Bloom reads racially insensitive statements off of cue cards provided to him by his manager at a press conference. That could have gone somewhere interesting. Instead the movie takes a short tangent in which Orlando Bloom is followed by adoring Boneheads from the National Front. Even that could have been funny if it went somewhere, but the storyline is just dropped. I kept thinking maybe they’d go more into sleazy promoters and managers manipulating some poor boxer into playing a villain in order to fill their pockets…

But it never happens, even though that’s actually, sort of, the plot. The Calcium Kid should never be in the ring. He’s on this journey because people with money are looking to make more money and they see a way to spin a storyline in order to sell it to the public. You could have had a whole sequence with the boxing press grumbling about what a gross mismatch it would be until hearing the press releases and receiving the free swag and promotional items.

Boxing is so ripe for satire, it’s a shame that there aren’t more movies that attempt it.

Oh, also there’s pretty much no boxing in this movie.

The sparring session that pretty much opens the movie is the only boxing you’ll see until the last ten minutes or so, where we get so see less than a minute or so of fighting going on in a janitor’s closet.

I guess what I’m trying to say is that if there’s no boxing in it, and they’re not going to really satirize the promotional aspect of the boxing world, then:

Why would you, as boxing fans, want to watch a “boxing” comedy that has no boxing and isn’t very funny?

This movie is rated R. I think there’s some brief nudity, but really I don’t remember. Probably there was a strip club sequence. Cool edgy movies like to have strip club scenes. Also people like to curse a bunch pretending like it makes the dialogue better.

Keep an eye out for cameos by Frank Bruno and Chris Eubank. Before I realized what was going on, I thought I was being treated to the world’s worst Sidney Poitier impersonation on the planet, then I remembered that in some countries, boxers are celebrities that show up in movies and people recognize them.

The Calcium Kid is a remake of a 1936 Harold Lloyd movie called The Milky Way. I haven’t watched it yet, but it’s available to view on YouTube.

Join me next week, when I watch The Milky Way, on YouTube, starring Harold Lloyd.