The Ballroom, Boardwalk Hall, Atlantic City, New Jersey– Sergey Kovalev (24-0-1, 22 KOs) was cut over both eyes and sent to the canvas Saturday night in the HBO Boxing After Dark main event, but none of the damage came legally and none of it mattered a bit in an utterly dominant seventh round knockout of Cedric Agnew (26-1, 13 KOs). 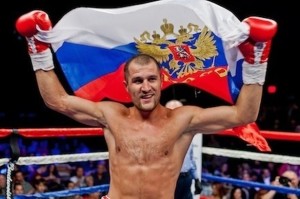 The unknown and unheralded Agnew came into the biggest fight of his career boasting a flimsy record with unanimous decisions over Yusaf Mack and Otis Griffin as its high water mark. Still, there was plenty of buzz about this huge underdog and how he just may be better than most expected.

Kovalev did find some trouble in dealing with the high-guard southpaw defense of Agnew and seemed uncomfortable with his challenger’s sudden bursts of offense. A low blow would even send the aggressive battler to the canvas early in the bout. But none of it kept the defending WBO light heavyweight champ from winning every round and from sending Agnew to the canvas in rounds two and six from a leaping head punch and hard jab to the mid-section, respectively.

A straight jab to Agnew’s gut in the seventh, a repeat of the shot that sent him down in the sixth, put the game challenger down. Too battered and drained to continue, Agnew would take the full ten count.

After the fight, HBO’s Max Kellerman asked the WBO titlist about the now-unlikely clash with consensus light heavyweight champ, Adonis Stevenson. Kovalev would refer to the WBC titlist as a “piece of shit.”

With the victory, the Puerto Rican wins the NABF junior welterweight title.