4/3 – Leonard Zappavigna (31-2, 21 KO’s) vs. Shuhei Tsuchiya (15-3, 13 KO’s) – The Melbourne Pavilion, Flemington, Victoria, Australia
Zappavigna looked like he was headed for big things when he beat Ji-Hoon Kim in an IBF eliminator nearly four years ago. After losing his world title shot to Miguel Diaz, he was stopped in his next bout by Ammeth Diaz and has reverted to fighting second tier opponents since then. Coming in with five straight wins, he faces Tsuchiya, who lost two of three bouts in 2013, for the vacant WBO Oriental light welterweight title.
*Zappavigna won via 10th round TKO

4/3 – Monte Barrett (35-10-2, 20 KO’s) vs. Luis Ortiz (20-0, 17 KO’s) – Fantasy Springs Casino, Indio, California, USA
The 35 year old Ortiz puts his undefeated record up against his best opposition to date. The former WBO and WBC Latino title holder has stopped five of his last six opponents in four rounds or less. Barrett’s fought guys on every level of the sport, his biggest recent accomplishment being a close decision over David Tua in their rematch three years ago. He hasn’t fought in over a year though, and was last stopped by Shane Cameron in mid-2012.
*Ortiz won via KO4

4/4 – Edner Cherry (31-6-2, 17 KO’s) vs. Roberto Osiobe (14-8-4, 6 KO’s) – Liacouras Center, Philadelphia, Pennsylvania, USA
Assuming Curtis Stevens provides us with another knockout (a pretty good assumption) and frees up some air time, this one will probably get on TV. Cherry ‘s unbeaten in his last eight contests, the former USNBC lightweight champ faces Osiobe, who’s on a three fight losing streak, in a scheduled eight round contest on the NBC Fight Night under card.

4/5 – Luis Yori Boy Campas (101-17-3, 79 KO’s) vs. Daniel Gonzalez (9-30-2, 3 KO’s) – Silver Spur, Belgrade, Montana, USA
It seems like Campas has been around forever. In his 26th year as a pro (yeah…26!), the former light middleweight world champion is looking for one more big fight. The 42 year old has spent the last few years fighting with little fanfare, but stays busy hoping for something better to come along. He comes in off back to back technical draws. Gonzalez has lost 15 straight, as has only fought twice since 2010. 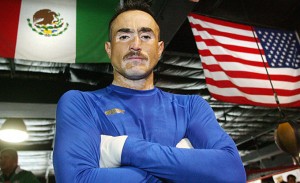 4/5 – Giovani Segura (31-3-1, 27 KO’s) vs. Felipe Salguero (19-5-1, 14 KO’s) – Hipódromo Caliente, Arena Tecate, Tijuana, Baja California, Mexico
Segura’s a former WBA World, WBA Super World, and WBO light flyweight champion. He lost a close one to Edgar Sosa last May but came back with two knockout wins over undefeated Jonathan Gonzalez and Hernan Marquez respectively. Salguero held the WBF light flyweight title, but was unsuccessful in tries at the WBO and IBF straps. He stopped the over matched Ramon Pena in December.

4/5 – Juergen Braehmer (42-2, 31 KO’s) vs. Enzo Maccarinelli (38-6, 30 KO’s) – Stadthalle, Rostock, Mecklenburg-Vorpommern, Germany
Braehmer won the WBA light heavyweight title in his last outing; beating then undefeated Marcus Oliveira over 12 rounds. His two losses were both by decision, one of which he avenged with a knockout win. Maccarinelli held the WBU and WBO cruiserweight titles, but after getting starched in two rounds by David Haye in 2008, he hasn’t been able to stabilize his career again. Short winning streaks interrupted by knockout losses stopped him from gaining any real momentum. Currently, he’s on a three fight win streak and holds the Commonwealth (British Empire) light heavyweight title, won from Ovill McKenzie in their rematch which Maccarinelli avenged a prior knockout loss.

4/6 – Akira Yaegashi (19-3, 9 KO’s) vs. Odilon Zaleta (15-3, 8 KO’s) – Ota-City General Gymnasium, Tokyo, Japan
The WBC flyweight title is on the line as current champ and former WBA/WBC minimum-weight title holder Yaegashi makes his third defense since winning the belt a year ago. Zaleta is the FECARBOX light flyweight title holder, but comes in off a close 10 round loss to Mario Rodriguez in a non-title bout last September.

4/6 – Adrian Hernandez (29-2-1, 18 KO’s) vs. Naoya Inoue (5-0, 4 KO’s) – Ota-City General Gymnasium, Tokyo, Japan
Hernandez defends the WBC light flyweight title against the 20 year old Japanese and OPBF light flyweight title holder. This is Hernandez’s second title reign; his first in2011 was cut short when he was beaten by Kompayak Porpramook. He stopped Porpramook in the rematch to regain the title and has made four successful defenses since. Inoue has beaten more experienced pros in his short career. Even so, still hard to see a five fight rookie getting a world title shot.

4/6 – Roman Gonzalez (38-0, 32 KO’s) vs. Juan Purisima (11-4-1, 4 KO’s) – Ota-City General Gymnasium, Tokyo, Japan
Roman is a long reigning champion, holder of both the WBA titles in both the minimum-weight and light flyweight classes before moving up to flyweight. He’s been successful in 10 world title affairs, the last against Juan Francisco Estrada in 2012 before vacating the title. Purisima is the Philippines Boxing Federation (PBF) flyweight title, and comes in off a loss to WBA International flyweight champ Artem Dalakain.

4/9 – Anthony Mundine (46-5, 27 KO’s) vs. Joshua Clottey (37-4, 22 KO’s) – Entertainment Centre, Newcastle, New South Wales, Australia
Mundine is still looking for that big payday against Mayweather, but this week he faces the durable Clottey in a defense of the WBA International light middleweight title. Mundine has held world titles in all three of the middleweight classes, but has rarely fought outside Australia and hasn’t had much success when stepping up to face real world class opponents. His biggest win was over a badly faded Shane Mosley last November. Clottey has been in the ring with the best: won some and lost some, but has never been knocked out. After nearly two years off he scored a 10 round win over Dashon Johnson last September.