Hola family and welcome to the newly crowned champion of belated food themed boxing columns, The Mid-Week Meal Ticket. This time, of course we’re chopping up the many fights that took place from the DC Armory in Washington, DC, USA. Bust out the ketchup, mustard and American cheese and get ready for unifications, disappointments and knockouts 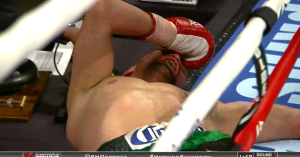 because we’re about to start the show! With that being said, I gave you your instructions in the dressing room, what I say you must obey – Cuidate, escucha me, toca los manos y buena suerte…Let’s get it on!

I do really enjoy watching Peter Quillin ply his craft. He’s a fairly well rounded fighter who can fight off the ropes, going forwards and backwards. That being said, there were large portions of the crowd (and on Twitter, for that matter) booing for some of his fight against Czech, Lukas Konecny. Vegas odds makers had Konecny listed as a 20-1 underdog, and while the judge’s scorecards read as a virtual sweep for the Cuban-American, at times Quillin was tagged solidly and was made to look uncomfortable by the massive dog. While Kid Chocolate does a lot of things right in the ring, I think if he shores up his defense he could potentially unify the belts at middleweight.

After the bout, Quillin was asked by Showtime’s Jim Gray if he thinks he’s on the level of a Sergio Martinez or a Gennady Golovkin and his response was “With Al Haymon in my corner, of course I do…” And THAT, ladies and gentlemen is a window to the inner workings of the boxing industry. If nothing else, when a fighter is asked about his technical abilities and he references his manager as the reason he’s ready for the other top fighters in the division, whether he is or not, that is fantastic insight into the business end of the industry.

You have to hand it to Shawn Porter, he’s developing into an aggressive, powerful young champion; a little wild at times, but effective none the less. How much Victor Conte’s SNACs are helping him remain to be seen, but in his last couple of scraps he has been looking positively beastly.

In defeat, Paulie Malignaggi was classy and introspective, saying to Porter “…make sure they know I lost to a great champion…” Even if he chooses retirement, in my opinion he is one of the best fighters to ever be a commentator, hell; I’ll go as far and say one of the best color commentators in the business.

I believe in Aliens

Ahead of Bernard Hopkins’ tactical, technical dismantling victory over Kazakhstani, Beibut Shumenov, Hopkins said that this was just the start of unifying the titles at light heavyweight. Speaking about Kazakhstanis’, why do they always come out to the ring in razzle capes?

Hopkins says that everything he does is history. Indeed he makes history every time he steps in the ring…barring some failed P.E.D. test (of which I don’t believe he’s participated in…nor am I saying he’d fail if he took one) he’ll surely go down in the same high regard that George Foreman had when he was the oldest world champion, a feat which Hopkins has bested many times over already. If (and most likely so) Hopkins is au naturel, he is in an extremely small group of men who are the hardest working athletes in all of sports.

When I think of Hopkins and his many accomplishments, one in particular comes to mind: Kelly Pavlik. After a dominating performance over the young champion, B-Hop stood on the ropes, folded his arms in triumph and stared at all the non-believers in press row, an epic moment in boxing if you ask me.

A quick note about the scoring, though. One of the very worst I’ve seen, I’m talking C.J. Ross bad. Gustavo Padilla (the same judge who scored a draw in the recent Garcia –Herrera contest…I guess Panamanians judge fights like they drive…) scored the fight 114-113 in favor of the Kazakhstani, Shumenov. The other two judges had slightly more reasonable scores of 116-111 for the Alien. I had it wider, but at least the right person won on the cards (as well as in public opinion).

In a weird way I admire Shumenov being his own trainer. As someone with a martial arts background the discipline you can learn can take you to such great heights, in another sense, though, when you’re actually in a fight it’s unbelievably beneficial to have a second (or even third) set of eyes to help you see things you cannot.

Adrien Broner’s beard. That being said, it looks like he’s got a bit of a way to go before he hits his target weight ahead of May 3rd …

And now, ladies and gentlemen I will take a drastic swerve off my usual themed recipes and give you a an American (Chinese) classic, beef and broccoli!

First what you’ll want to do is cut your flank steak (yes, don’t waste those expensive cuts) into thin strips and at this point you can chose to marinate it or not. If you want that extra flavor kick (or are trying to impress someone) marinate it overnight in a mixture of ¼ pound of thinly sliced beef, thinly sliced shallots, 1tbs Kikoman soy sauce, a few dashes of white pepper and Chinese rice wine.

If you don’t marinate (and that’s totally OK), get some vegetable oil nice and hot (you’ll know what it’s ready when you can throw a droplet of water in the oil and it dances and spatters) and cook your beef, making sure to separate it as it cooks.

You don’t want to overdo it because it still has to stir fry so take it out while it has some pink in the center still. Rinse the beef with a quick splash of water to remove the excess oil (ever had a bad experience after eating Chinese food, if they skipped this step that could be why) and set aside.

Blanch your carrots and broccoli florets in boiling water until just fork tender then shock them in ice water to halt the cooking process. You’re now ready to stir fry!

In a hot wok or pan place a small amount of oil and place a little chopped garlic in the center, as soon as it starts to brown add 1Tbs oyster sauce, 1/2tbs soy sauce, a dash of white pepper, 1tsp sugar (MSG if you’re so inclined) and if you like your sauce tight and shiny like they have it in those Chinese American restaurants, make yourself a slurry of corn starch and cold water and use a teaspoon of it at this time. At the very last second a quick hit of sesame oil will round out the dish perfectly and you will love me if you followed my instructions carefully.

We’ll be back next week with more zombie killing tips, tricks and reviews of the best and most efficient firearms on the market, until then, santé.

Feel free to send me love and/or hate mail at JESSEBOXINGTRIBUNE@GMAIL.COM or you can always pretend we’re friends on Twitter at @JESSEBOXING