At first glance this should be another reasonably straightforward defence by Floyd, against someone whose aggressive come forward style looks to be made for him. Maidana however has the kind of relentless style which could test Mayweather Jr. Maidana needs to keep at Mayweather Jr as he did against Broner, and not allow Floyd to dictate the pace of the fight. 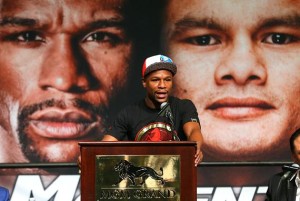 Maidana has the strength and power to test Floyd’s defences, and the durability and heart to walk through Mayweather Jr’s counters. If he can do this then things could get interesting. This looks like being Floyd’s most entertaining and competitive fight since his Miguel Cotto bout.
Ultimately, however, Floyd will be too fast and too skilful for Maidana. Mayweather Jr by points decision, but not without some uncomfortable moments along the way, for the pound for pound king.

Mayweather comes in as the huge favorite, but there’s always the possibility of an upset. In order to pull one off Maidana would have to bully Mayweather against the ropes and land that chopping right hand over his tight guard, the way he did against Adrien Broner. But, before you get your hopes up, we’ve seen this before. Arguably the greatest defensive boxer of all time taking on a pressure fighter who’s there to be hit. Diego Corrales, Jose Luis Castillo, Carlos Baldomir and Miguel Cotto, none have succeeded and neither will Maidana. And what the Argentinian lacks from those who’ve went the distance with “Money”, is a size advantage or a chin. According to BoxRec, Maidana has tasted the canvas seven times in his career. Mayweather via TKO RD 8.

Marcos “Chino” Maidana has a tall task ahead of him come Saturday night. Odds makers have him listed as a sizable underdog at +700 to Floyd “Money” Mayweather’s -1400 and rightly so. All Maidana needs to do is land his shots and he has a legitimate chance at stopping the undefeated kingpin – Easier said than done – Mayweather has yet to be caught clean (Shane Mosley aside) in quite some time and the Argentine has a considerable disadvantage in both hand and foot speed. The pick here is pretty straight forward, unless Maidana can cut off the ring like he did against Adrien Broner he stands little chance of anything besides eating pot shots all night…Mayweather is worlds away from Broner in all areas. That being said I see this playing out like the Ricky Hatton fight. Floyd Mayweather by TKO inside of 11.

Maidana’s only chance at scoring the upset here lies in his power, but unfortunately he doesn’t have the right style to deliver that power against Floyd. He’s tough and aggressive, but Mayweather is just too good, and hasn’t lost a step yet, which is what it will take for anyone to have a shot at beating him. Maidana will make it tough; the guy’s a machine that’ll keep coming forward for 12 rounds, but in the end Mayweather’s skill will be the deciding factor as always, and he’ll walk away with a wide unanimous decision.

Maidana’s wide, wild, cuffing punches may actually be an asset in this fight and could, conceivably, do some damage to a Mayweather accustomed to ultra-orthodox fighters like Canelo Alvarez. Maidana will also likely be pursuing and throwing meaningful punches for the entire fight. There seems to be no self-doubt in Maidana and that will ensure that fans get a full, solid effort from the Argentine. Having said that, though, Mayweather is just too good and too skilled to lose to a guy like Maidana– even an improved version of Maidana. Expect an entertaining effort from Maidana, but a decisive victory for Mayweather. My prediction– Mayweather via unanimous decision.

Maidana’s confidence might be at an all-time high after dominating “Little Bro” Adrien Broner last year. And while smart tricks such as feinting the left hook to the body and throwing it upstairs were easy money against Broner, Maidana will find himself systematically picked apart and swinging at air against the artists whose style Broner has adopted. The fight will probably be close early, as Mayweather gets a feel for Maidana’s plan, but will gradually turn into a one-sided dissection. Don’t expect Mayweather to lose more than one or two rounds on Saturday night.