Last month, it was announced that Dmitriy Salita’s Star of David and Roy Jones Jr.’s Square Ring Promotions had officially signed former National Golden Gloves champion Steve Martinez (14-1, 11 KOs). In February, he came back from a 16-month layoff to defeat Rahman Yusubov (9-15, 7 KOs) at the Millenium Theater in Brighton Beach, Brooklyn. He returns to that venue May 15 against Antonio Chavez Fernandez (4-17-2). 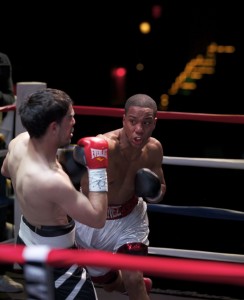 The Bronx native expects to be well represented at the Brooklyn venue and doesn’t foresee any problems fighting the late replacement Fernandez, who was chosen after Martinez’s original opponent dropped out.

“I’m good with whoever they choose,” said Martinez. “It doesn’t affect me. We train for a game plan and execute. Training is going good and I’m ready for the fight.”

When Martinez’s stint with Dibella Entertainment came to an end, he stayed a free agent while figuring out his next move. During that time, Salita and Jones Jr. pursued him feverishly. That courtship, combined with the attention he expects to receive from his new promoters, was enough to get him to sign on the dotted line.

“After I had my promotional issues, I was a free agent for a couple of months,” said the junior middleweight. “From the start they [Salita and Jones Jr.] were knocking on my door and calling me every week. This was a good choice for my team because they don’t have a lot of fighters, so the attention should be on me.”

Other local 154-pounders, like Eddie Gomez and Frank Galarza have had success during Martinez’s break. And although he would welcome a bout with his city counterparts, he’s looking beyond the five boroughs.

“Those are kids I grew up with and I don’t have anything against them but it’s competition,” Martinez said. “If they’re in my way or if there’s an opportunity, then yes it will be taken. Those are great names in NYC but there are much more names out there in the states and the whole world.”

Martinez’s lone defeat came in 2012 against Denis Douglin (16-3, 10 KOs) on ESPN’s “Friday Night Fights”; in what was a competitive bout which famed trainer and commentator Teddy Atlas scored in his favor.

“I know that I won that fight, I’ve seen it a million times and yes I’d be interested in a rematch,” said Martinez. “Because every time I have an interview or someone bumps into me they always bring it up. It doesn’t frustrate me because it was two-years-ago and I feel like I’m a way better fighter now.”

The former amateur standout views his revamped team as a new phase in his career; which he begins as a wiser more experienced boxer.

“Not that I’m starting from scratch, but it’s a new chapter,” Martinez said. “I’m seasoned now, I’ve fought in big venues and on ESPN. Those were all learning experiences.”

Martinez began boxing at 11-years-old, after his Mother and Brother encouraged him to sign up at the Webster PAL, in an effort to keep him off of the streets.

He now has a seven-year-old son of his own and when he’s not training, he studies plumbing at the Berk Trade and Business School. He attributes his success in the ring to the birth of his son.

“When I won the Golden Gloves, my motivation was my son,” Martinez said. “That’s what kept me going. I was like 16 or 17-years-old when he was born and that was my motivation to keep going and have a better future for him.”

The 24-year-old graduate’s from school in August. He then hope’s to have one or two more fights before contending for a title.

Juggling school and fatherhood while in pursuit of a championship would be a difficult journey for anyone to embark on. But it’s a quest that Martinez prepares vigorously for and one he’s willing to put everything on the line to achieve.

“I’m working, I stay motivated, I stay positive and every day that I go to the gym I go hard,” said Martinez. “I basically put my life on the line while giving it my all in fights. Support would be great and appreciated, because I do it for all of my fans, my Bronx fans, New York fans and Puerto Rican fans. This is what I love.”