Shannon Briggs (53-6-1, 47 KO’s) vs. Matthew Greer (16-12, 13 KO’s) – Mountaineer Casino Racetrack and Resort, Chester, West Virginia, USA
The “comeback” continues. After three and a half years of inactivity, the former heavyweight WBO heavyweight champ fights for the third time in five weeks, taking a short break from his anti-Klitschko theatrics. Greer looks to be a safe opponent, having his last seven losses all come via stoppage with just two wins in his last eight bouts.

Omar Andres Narvaez (41-1-2, 22 KO’s) vs. Antonio Garcia (13-1, 6 KO’s) – Anfiteatro Municipal, Villa Maria, Cordoba, Argentina
Narvaez defends the WBO super flyweight title for the eighth time on TYC Sports “Boxeo de Primera”. The two division champ is closing out his 14th year as a world title holder, having won the WBO flyweight belt in 2002 and making 16 defenses before moving up in weight to snag his current title. The one loss on his ledger can be forgiven; in 2011 he jumped to the bantamweight division and was soundly beaten by champion Nonito Donaire. For Garcia this is big step up. The 20 year old WBO Latino bantamweight title holder gives up 11 years of experience to the 38 year old world champ and hasn’t faced anyone close to the level of Narvaez.

Gary Buckland (28-3, 9 KO’s) vs. Gavin Rees (37-4-1, 18 KO’s) II – Motorpoint Arena, Cardiff, Wales, United Kingdom
Rees has decided to stick around for one more contest. The former WBA light welterweight champ is on a three fight skid after losses to Adrien Broner, Anthony Crolla and Buckland in their first match up. Rees claims that he’s retiring after the rematch regardless of the outcome, but a win could change everything. Buckland took a close decision in the first meeting, what many were calling a fight of the year candidate at the time. He’s held British titles in the lightweight and super featherweight classes, but has been without a belt since being stopped by Stephen Smith last August. 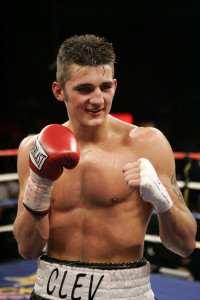 Arena, Cardiff, Wales, United Kingdom
This is Cleverly’s first fight back since being stopped by Sergey Kovalev last August, losing his WBO world light heavyweight title after four successful defenses. He makes the move to the cruiserweight class with the vacant WBA Inter-Continental cruiserweight title up for grabs. Corbin’s held the WBC Caribbean Boxing Federation title in the light heavyweight and cruiserweight divisions, with his biggest win coming over former world champ Wayne Braithwaite in 2012.