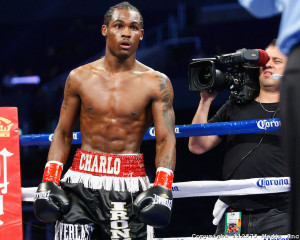 Centre, Montreal, Quebec, Canada
The light middleweight half of the Charlo brothers is coming off a solid win in January over Gabriel Rosado. He’s also beaten prospects Harry Joe Yorgey and Demetrius Hopkins and won the WBC Continental Americas and USBA light middleweight titles. Originally from New York, Ota built his career in Japan, where he was the OPBF and Japanese light middleweight champ. He recently returned stateside to fight for Lou DiBella’s Broadway Boxing and beat Mike Ruiz in what was his second fight on American soil.

5/23 – Jhonny Gonzalez (55-8, 47 KO’s) vs. Clive Atwell (12-0-1, 7 KO’s) – Convention Center, Acapulco, Guerrero, Mexico
Gonzalez defends the WBC featherweight title for the first time since scoring a first round knockout over Abner Mares last August. This is his second stint as WBC champion, having held the title through 2011 and most of 2012, winning five title contests before losing to Daniel Ponce DeLeon. He also held the WBO bantamweight belt in 2005-2006. The undefeated Atwell holds the WBC Carribean Boxing Federation featherweight title, but Gonzalez is a big step up from any of his previous opponents.

5/26 – Rocky Juarez (29-10-1, 21 KO’s) vs. Rene Alvarado (20-2, 14 KO’s) – Fort Bliss Arena, El Paso, Texas, USA
Juarez is looking for his second straight win since going on a six fight losing streak. He’s held a few minor belts but has yet to succeed in a world title contest and hasn’t fought since October of 2012. Alvarado is the WBC Silver featherweight title holder; Juarez looks to be one of his better opponents.