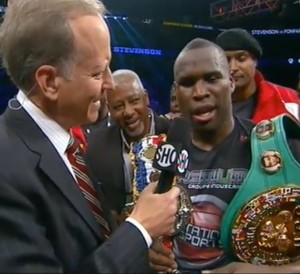 Poland’s Abdrzej Fonfara (25-3, 15 KOs), dropped by a head shot in the first and a body shot in the fifth, took a massive beating from an Adonis Stevenson (24-1, 20 KOs) on cruise control through eight rounds and it seemed just a matter of time before the tall, lanky jug-eared Pole would crumble.

But Fonfara didn’t crumble. Instead, the highly-ranked challenger kept coming forward and kept throwing punches until a nice left-right combo met with a tired and careless Stevenson in the ninth round.

Stevenson would hit the canvas and beat the count, but he looked dead tired and close to the point of no return.

For the remainder of the round, Stevenson held on, clinching desperately while the suddenly rejuvenated challenger worked his two fists and, on one occasion, his head, in the pursuit of the stoppage.

Unfortunately for Fonfara, his window of opportunity seemed to last no longer than the three minutes of round nine as Stevenson regained his composure– and control of the fight– in the tenth, closing out the bout once again in full control.

After the bout, Stevenson blamed his less-than-superhuman performance on an injured hand. The consensus light heavyweight world champ would then do some beating of the drums for a Hopkins bout while assuring that WBO titlist, Sergey Kovalev was also in his immediate plans.