“While Ruiz will have no trouble with Davis, Hanks may prove more competitive. May, but won’t—I’m predicting early-stoppage wins for the abundante Andres. As quintessential fat man Kasper Gutman said in The Maltese Falcon: ‘The best goodbyes are short.'”—Clarence George

“[Ruiz] is very fast and has great movement for a big man and he has a good chin. He walked right through Hanks’ right hands.” —Brad Goodman

When you first see Andy “The Destroyer” Ruiz Jr. get into the ring (or at least the fatter version as he is fast losing weight), you might suspect he is a Shannon Brigg’s opponent waiting to be knocked out by the first mysterious body shot. But this impression is soon replaced by one that says, “Hey, this guy is no opponent; he can flat out box.” 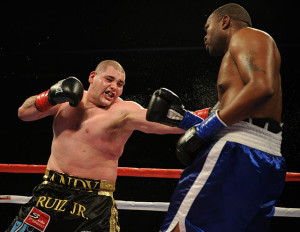 This 24 year-old heavyweight was born in Mexicali, Baja California, Mexico, lives in Imperial, California and at first glance looks like he is badly out of shape, but he was once described as a “ fat Amir Khan, at least in terms of quickness of hand.” That deceptive hand speed has generated 16 mostly early stoppages for “The Destroyer” who uses well-executed combos to set his opponents up for the kill. His destruction of Tor Hamer in Macao in November, 2013 was quick, economical, and decisive and just this past week, he stopped Manuel Quezada, no slouch, in two rounds in a rare faceoff of Mexican-born heavyweights. Interestingly, Quezada went the 12-round distance with Chris Arreola on 2010 and Steve Cunningham in 2013.

During his amateur career, Ruiz ran his record to 104-8 under Cuban trainer Fernando Ferrer. He went on to win two Mexican National Junior Olympics gold medals and won the World Ringside Heavyweight Championship. He represented Mexico at the 2008 Beijing Olympic Games qualification tournaments but didn’t make it to the end.

Freddie Roach is Andy’s new trainer at the Wild Card Gym and that can only spell more trouble for his opposition. Ruiz is slick and measures his opponents subtly using his right hand sometimes throwing it without committing, sometimes feinting. He also works behind a solid and educated jab that goes both upstairs and downstairs as he cuts off the ring effectively. Given Andy’s sound fundamentals and technique, it would seem Roach’s primary job will be to do some fine-tuning and concentrate on getting the Mexican native’s body in prime shape.

There is any number of opportunities out there for this 250 pounder (he weighed 300 for his first pro fight) but the most fan-friendly in my opinion would be a match up with Chris Arreola. The noxious Shannon Briggs has been making noise but he sounds more like someone who wants an unearned payday than someone who is willing to take a risk. Vyacheslav Glazkov, Mike Perez or even Malik Scott might fit the bill as well. The point is it’s time for the fan-friendly Destroyer to move his level of destruction up a notch.

Andy Ruiz Jr. wants to be the first world heavyweight boxing champion of Mexican descent. Right now and within those parameters, no one has a better chance.