0
SHARES
ShareTweet
by Jesse Ian Lardies
Holy familia y amigos, welcome back to a gut-wrenching, brain-rattling, easy to swallow dinosaur shaped edition of Mogadishu’s 15th most popular weekly boxing column, The Sunday Brunch – We are the number one source for number one sources.  We’re chopping up all sorts of knockouts, upsets and told-ya-so moments this week. First on tap we discuss the pros and cons of chocolate milk versus Yoo-hoo chocolate flavored drink, next up we’re talking about Nonito Donaire’s latest conquest (?) and Vic Darchinyan’s latest defeat. Also, there was some sort of boxing contest over in the UK and we are on the case, investigating to get to the bottom of this allegation. So, load up on crossbow bolts, .40 caliber rounds and med kits, we’re about to start the show. With that being said, I gave you your instructions in the dressing room, what I say you must obey – Cuidate, escucha me, toca los manos y buena suerte…Let’s get it on! 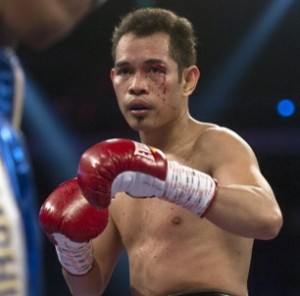 Live from the Venetian in Macau, China (taking place around 8 am, earth time), former pound-for-pound darling, Nonito Donaire took on Simpiwe Vetyeka of South Africa in the main event of a Top Rank sponsored card. In what turned out to be a very peculiar series of events, Donaire, with the help of referee Luis Pabon and a very sympathetic ringside doctor, managed to eke out a technical decision and claim the WBA super world featherweight championship strap.

Problems arose for the former Flashy Filipino when what appeared to be a strafing left hand opened a tough gash on his eyelid, prompting him to abruptly turn his back several times on his opponent to take a leisurely visit to the accommodating ringside physician for a quick clean up.
Now, call me crazy, but I was pretty sure that the doctor is not supposed to clean the blood from a fighter’s cut (let alone 3-4 separate times), but only to examine and offer professional advice to the referee whether or not the fight should be stopped…
Not only did this happen on multiple occasions throughout the four rounds of action, but Donaire was asked if he could see several times and replied “no” to the question. Right there, for the fighter’s safety the bout should have been stopped with a “no contest” ruling.
However, this IS Nonito Donaire we’re talking about here.
And when Nonito Donaire is fighting, sometimes rational thought goes out the window.
Fast forward three rounds and one solid knockdown in Donaire’s favor and the referee magically ruled the mystery cut caused by accidental clash of heads, although there was little evidence of that actually occurring.
Subsequently, at the start of the fifth round, both fighters got off their stools and made their way to the center of the ring to resume combat only for the referee to inform Donaire’s corner that NOW he could no longer continue and the fight will conveniently go to the judge’s score cards. Keep in mind that if the fight was stopped any sooner, the popular Filipino would have missed out on capturing the belt from Vetyeka.
That’s what we call a tactical stoppage.
To his credit, though, Donaire announced that he’d like to offer a rematch to the South African…we shall see if that actually comes to fruition.
On the same card, former bantamweight killer, Vic Darchinyan was dropped three times en route to what could be a career ending stoppage by knockout specialist, “The Axeman” Nicholas Walters. Darchinyan was unable to really mount any sort of meaningful offense as the Panamanian trained Axeman was far too rangy and clever for The Raging Bull’s old tricks.
A fighter from Hong Kong by the name of Rex Tso also fought on the Macau undercard. If he wants to eventually make his way to the bright lights of the American boxing scene (no relation to the popup and malware laced website),  then someone should advise him to change his alias from “The Wonder Kid” to the “General”. I’m just saying.
Wembley Stadiun, London, England – some 80,000 rabid boxing fans and patriots crammed their way into an absolutely electric atmosphere for the rematch of Carl “The Cobra” Froch versus “Saint” George Groves.
In their first fight, Groves, several times had the upper hand until eventually he was dropped as the fight wore on leading to a somewhat controversial and fast TKO stoppage by referee Howard Foster.
In the eagerly anticipated rematch, however, Froch demonstrated a more patient demeanor. While the faster hands of George Groves were often times on display, Carl Froch had the final say in the matter, dropping Groves with an immaculately timed right hand, crumpling Saint George to the canvas. With the big win, Froch holds on to his IBF and WBA super middleweight championship belts.
While he may have lost the Super Six Boxing Classic several years ago, I think most would agree that Froch has achieved more impressive heights than has the winner of said tournament, Andre Ward.
After the bout Carl Froch expressed interest in fighting in the modern Mecca of boxing, Las Vegas. I, for one, would love to see a rematch with the aforementioned Super Six winner, if you could convince him to fight outside of Oakland, California, that is…
I do think that Andre Ward will still be too rangy, elusive, crafty and dare I say it…dirty for Carl Froch to dethrone. It would be an exciting and possibly money spinning fight, although I feel the outcome would be the same when all is said and done.
Still, Carl Froch has the hottest girlfriend in all of boxing and possibly on the planet. So, in my eyes anyway, everything is always going to be a win win scenario for him.
Thanks so much for joining us again this week, we’ll be back next Sunday with more tips, tricks and codes for the Nintendo Entertainment System. Also, we will have our usual lessons in interplanetary travel, a brief lecture on quantum mechanics and we’ll wrap it all up with a dissertation on string theory. Don’t hesitate to contact me with Devon Alexander huge head memes (or if you would like to see Rachael Cordingley’s sexiest animated GIFs) at JESSEBOXINGTRIBUNE@GMAIL.COM or pretend we’re friends on Twitter @JESSEBOXING. Until next time, sante!
Jesse Ian Lardies