Madison Square Garden, New York– For all intents and purposes, this high stakes middleweight title bout was over after the very first round.

Early in the first, a quick left hook from Miguel Cotto (39-4, 32 KOs) badly wobbled the legs of Sergio Martinez (51-3-2, 28 KOs) and led to a three-knockdown first that had the defending champ beginning the second round already four points down on the scorecards. 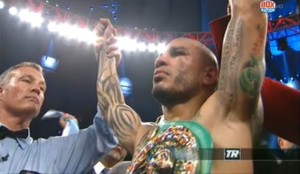 From there, the usually calm and calculated Martinez would have to become a heavy-hitting aggressor in order to even this fight out, but Cotto never gave him that opportunity.

Cotto, 33, boxed smartly and gave no openings to Martinez while keeping in full control of the pace and space of the bout. The 39-year-old Martinez looked for a way to turn the tide and managed to wins a couple of rounds in the middle of the fight, but there simple was nothing there. Cotto, who is one of the best frontrunners in the game, refused to make himself vulnerable, utilizing his hand speed and underrated boxing ability to score points, but also stay safe in a bout he was winning decisively.

It all eventually came down to Martinez’s corner, seeing their fighter in a deep hole after suffering a questionable knockdown in the ninth round and understanding that this Martinez against this Cotto was not going to manufacture the magical come-from-behind win, stopping the fight at the very beginning of the tenth round.

Now a four-division world champ– the first Puerto Rican fighter to accomplish the feat– Miguel Cotto (39-4, 32 KOs) has become the lineal middleweight champ and a rejuvenated hot boxing property. And the partisan pro-Boricua crowd at Madison Square Garden, which had to sit through an 0-2 televised undercard for Puerto Rican fighters, left happy and ready to celebrate the upcoming Puerto Rican Day festivities,

In the PPV opener, Ireland’s Andy Lee (33-2, 23 KOs) overcame a first round knockdown and a fifth round surge from John Jackson (18-2, 15 KOs) to score the one-punch knockout from a perfectly-placed right hand counter in the fifth.