This Saturday in Tuxtla Gutierrez, Chiapas, Mexico, Promociones Zanfer, in association with PR Best Boxing puts on a seven bout card featuring three contests with world titles or title opportunities on the line. 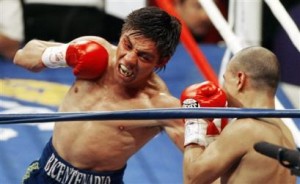 In the nights headlining attraction, former five time/four division world champion Jorge “El Travieso” Arce (63-7-2, 48), faces former world title contender Jorge Lacierva (41-9-6, 27 KO’s) in a scheduled 10 round bout. Arce’s resume as a world champion is a lengthy one; multiple titles from the light flyweight division through the super bantamweight class made him a top attraction for nearly 15 years with his seven losses all coming against world class opponents. He retired briefly at the end of 2012 after a three round beating at the hands of WBO super bantamweight champ Nonito Donaire. The retirement didn’t last, as Arce was back in the ring less than a year later to score an eighth round knockout of Jose Carmona last November and a fifth round TKO over Aldimar Silva Santos this past March.

In Lacierva, he faces a multi-time regional title holder that’s challenged, but had no success thus far in world title contests. He held the lightly regarded IBA bantamweight and super bantamweight belts in 1999-2000, and the GBU featherweight title in 2006, but is 0-4 in major world title opportunities which include his last bout: a 2012 shot at the interim WBA World super featherweight title against Bryan Vasquez that saw him down twice and eventually stopped in the ninth frame on body shots. This will be the 35 year olds first time in the ring since that loss.

One of the cards co-feature bouts puts Daniel Rosas (17-1-1, 11 KO’s) in against Alejandro Hernandez (27-10-2, 15 KO’s) in a 12 round bout for the interim WBO bantamweight title. Rosas is a former WBO Youth and CABOFE super flyweight title holder, and a win here would give him his first taste of world level honors after fighting Jose Cabrera to a 12 round draw in a 2011 contest for the interim WBO super flyweight strap. He’s won five bouts since, but lost his most recent outing in February, getting stopped in seven rounds by former world champ Rodrigo Guerrero.

Hernandez has made something of a small comeback in 2014 after the prior three years saw him lose three of four contests, including bouts against Leo Santa Cruz and Akifumi Shimoda. In January and March he picked up two victories and won the Mexico and WBO Inter-Continental bantamweight titles respectively. Defeating Rosas would make him a first time world title holder.

In what could be the nights best contest and most interesting match-up, the WBO Latino super flyweight champion McJoe Arroyo (14-0, 7 KO’s) takes a step up in class when he squares off with former world flyweight champion Hernan “Little Tyson” Marquez (37-4, 26 KO’s) in a scheduled 12 round IBF elimination contest that pits prospect against a younger, but more experienced veteran. Arroyo has been a staple on PR Best Boxing cards since turning pro in 2011, and the former Olympian looked good in his last bout in April against former world title challenger David Quijano, who in turn however, took the fight off back to back decision losses.

Aside from battle wear, the 25 year old Marquez brings the edge in all other aspects of this bout. Two years younger than Arroyo, he’s got five more years on the books, and nearly 30 fights more against better opposition than Arroyo has seen yet. He’s been in some tough contests though, and has been stopped in his last three losses so this could be the right time for Arroyo to add a big name win to his ledger.